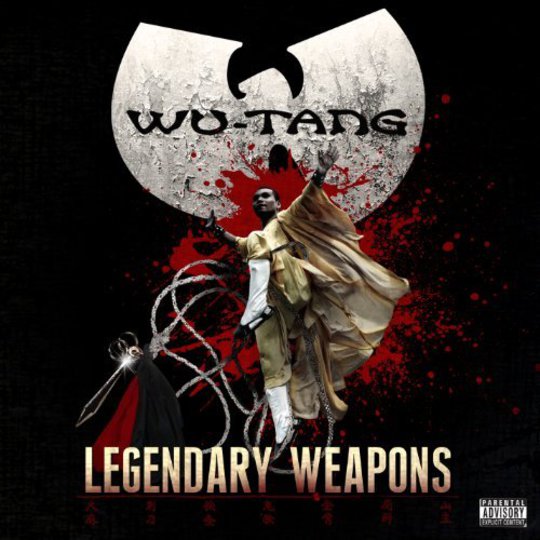 The collective tentacles of the Wu-Tang Clan have unwound so far over the best part of two decades that their very name has become more recognisable as a brand than for the rock-solid rap battalion they once were.

Don't get me wrong, the development and expansion of Wu-Tang's creative endeavours hasn't always been a curse, with the likes of GZA, Raekwon, Ghostface Killah and Method Man flying the Wu flag particularly hard on 'solo' classics such as Liquid Swords, Ironman, Only Built 4 Cuban Linx 1+2 and Tical, among others.

But an almost unnecessary abundance of spin-off releases, compilations and collaborations in recent years, often featuring but a handful of Clan members, has blurred the lines as to what a 'real' Wu-Tang Clan album is nowadays - even the clan themselves are often in disagreement - with many of these products leaving their hardcore following occupied at best, if a little short-changed.

It would be easy to feel the same way about Legendary Weapons, especially looking at it on paper. It's referred to as a Wu-Tang 'project' and only features seven of the Clan's nine core members - Masta Killa and GZA are both AWOL - with any lyrical gaps plugged by the capable hands of M.O.P. and Action Bronson among a handful of other friends and affiliates.

The production too, though 'RZA' in nature with the ruler-zig-zag-zig-allah himself ultimately pulling the strings, leans heavily on live compositions courtesy of house band The Revelations, with additional handiwork taken care of by producers Fizzy Womack, Noah Rubin and Andrew Kelley. What's more, the 'clan' bit is officially missing from the name this time, with the record simply carrying a 'Wu Tang' stamp, further pushing its position as merely an affiliated release than another link in the clan's collective chain.

Still, with all these concessions in mind, it becomes clear from the opening fanfare and Kung Fu patter of 'Start The Show' - lead into battle by Raekwon's smooth flow - that there's no need to worry; whatever the fuck this is, it's pretty good. Or at least, it's good enough.

In particular, Ghostface Killah's lyrical muscle is flexed in fine form throughout, appearing on the bulk of the album's 13 tracks. His opening display on 'Laced Cheeba', a minimal bonged-out groove-fest that'll make you bang your head so much you spill your skins, sets the tone, and is instantly exciting. It's got the same kind of grit and slick menace that made so many Wu-Tang classics; same with the title track which, almost as if to remind you who you're dealing with, splices in snippets of old verses from 'Protect Ya Neck', albeit tastefully.

The beats, hooks and overall feel of these tracks is of a welcome high standard, sitting somewhere between the tried and tested aesthetics of yore and slick reinterpretation. With elements of live jazz and soul permeating these tracks too - in particular, '225 Rounds' and 'Never Feel This Pain' - which in turn echo some of the myriad influences already present in their vault of old school samples, there is a consistent groove at play throughout that ultimately makes for a hugely enjoyable listen at times.

As a result, it adds an interesting colour to the familiar verbal prowess of these veteran legends, leaving it fresher, one might argue, that the Clan's last 'real' effort, 8 Diagrams.