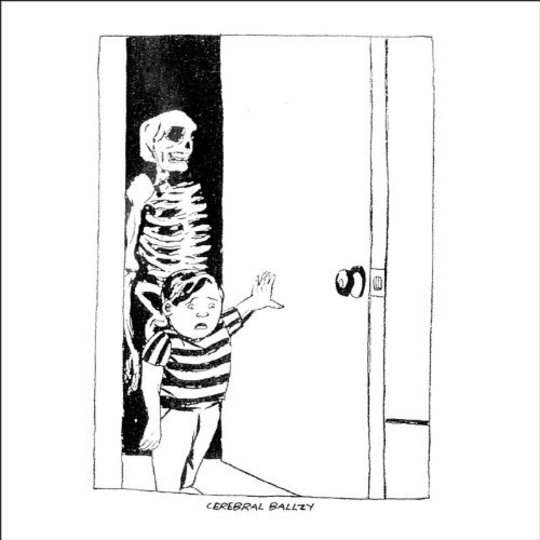 Cerebral Ballzy live for first impressions. Their entire fanbase is derived of people to whom the idea of naming a band after a debilitating mental illness is either high-larious or lame enough to ignore. Whichever your preference, this Brooklyn five-piece force you to commit to their distorted worldview from the moment you pick up their self-titled debut album. With a tracklisting seemingly written by one of the Teenage Mutant Ninja Turtles - my guess is Michelangelo - the likes of ‘Sk8 All Day’ and ‘Cutting Class’ command a caricatured High School brat’s mentality to survive any derisory backlash.

Given their 12 track record is a mere 19 minutes in length, the amount of time Cerebral Ballzy dedicate to the cause of ludicrous posturing is frankly astounding but ultimately it’s what endears them most. Wreaking hardcore havoc with an ear to ear grin is a look that fits our mischief makers like a glove and given their brief tenure, it rarely has a chance to wear off. While it’s never actually clear if ‘Office Rocker’ and ‘Puke Song’ betray the genuine belief teenage rebellion has never been done before or whether our unruly protagonists are just having too much fun to care, the band’s devotion to such snotty ideals cannot be questioned.

In between auditioning for the Biker Mice From Mars live-action movie, Cerebral Ballzy found a few spare minutes to write some songs. They are mostly totally rad maaaaaaan. “Catch me if you can,” wails lead singer Honor Titus over a chopping grunge guitar chords, “On the run. I’m on the run.” The track is unsurprisingly called ‘On The Run’. “I can’t turn my head without someone trying to influence me, he later pontificates over a cackling drum beat, “Eat this. Buy this. Be here. No fuck you man.” The track is titled ‘Don’t Tell Me What To Do’. You have probably sussed the general songwriting pattern by now.

Sonically, this band of delinquents position themselves at the fast and furious end of punk rock, propelling themselves into ‘Junkie For Her’ with an impressively taught rhythmically assault. Often, as with ‘Drug Myself Dumb’, they leave themselves no room to fabricate some drama between walls of visceral noise. Not that the instant gratification of ‘Insufficient Fare’ needs any added gravitas, but if Cerebral Ballzy don’t burn out before their second album they’ll find few slacker bases left to touch down on.

Regardless, Cerebral Ballzy is an album too desperate for your immediate attention to have any concerns beyond the last bar of ‘Anthem’. Its tearaway composers aren’t the menacing representation of the anti-establishment ideals they claim to represent. But it’s hard to imagine their songs being anywhere near as enjoyable if they ditched their love of pizza for Plato and Aristotle. Like a spiked orange soda punch bowl, Cerebral Ballzy are both luminous and irreverently childish. You can hate them for it. You can howl at their refusal to grow up. You’ll probably succumb to them in the end.