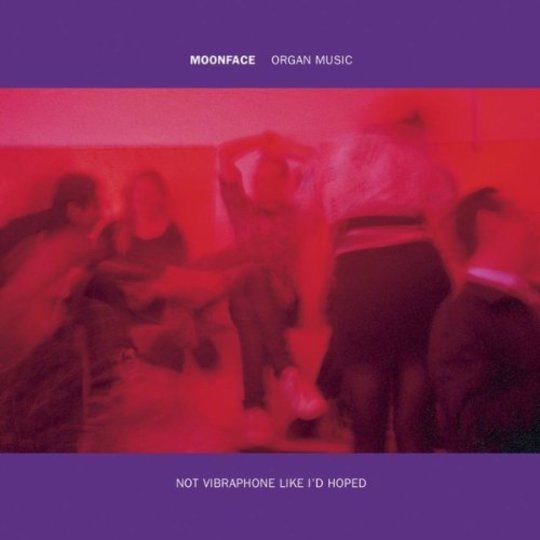 While we’d all like albums labelled 'Moonbeams and Jellybeans', or 'Technicolor Ponies in Digital Snow' to live up to what they says on the spine, by and large they don’t. (Okay, so those would be awful, but you get the point: a lot of self-professed psychedelia just sounds like ugly synths and over-used effects rather than what they're meant to evoke.) On the other hand, it’s a mark of Spencer Krug’s singular perversity that his last two releases have tried really hard to be as 'composerly' as possible in their titles, but even so the psychedelia of the contents seeps through into the phrasing. Who ‘hopes’ for vibraphone and doesn’t get it – let alone tells you so on a record they expect you to buy? If such naïve candour doesn’t endear Moonface to you straight away, then you’re in the wrong place, but if it does, you can start your drooling now.

Let’s assume you don’t need a history of the Wolf Parade / Swan Lake / Sunset Rubdown axis – there’s a family tree you can Google for if you want, and plenty of praise elsewhere on DiS – it’s important to remember, though, that Spencer started Sunset Rubdown in the spirit of genuine experimentalism; salvaging found-sounds from the shipwrecks of past genres, and unfashionable instrumentation. As he tells it, the early SunRub ideas weren’t practical for taking on the road, so he wrote songs that matched them in spirit, until the original impetus was all but buried under the glam-prog magnificence of Dragonslayer (2009), an album that mingled peacock-feather-era Eno and Roxy Music with the more operatic moments of 70s Queen, or Genesis. DiS wasn't the only site to award it 10/10 that year, well before a bunch of celebrities jumped on the SunRub bandwagon.

None of which evidently mattered to Spencer Krug as much as his perceived loyalty to the Weird. The second release from Moonface, Dreamland EP: marimba & shit-drums (2010), was self-effacing in the title, but in his total commitment to the premise (set a dream journal to music) Spencer managed to rival the seminal text of the Surrealist movement: Breton & Soupault’s Les Champs Magnetiques (yes, the original 'Magnetic Fields') from 1919.

All of which brings us to the first full-length release from Moonface, apparently pared down from 90 minutes of music that was meant to be drone-based and all-engulfing, but ended up more melodic. Thematically, Organ Music… re-visits all-of-the-above, but Spencer’s more lucid in his metaphors than ever before but loses none of the mystique for doing so; listening to this is like realising you can suddenly speak horse, or whale. On 'Return to the Violence of the Ocean Floor', Krug’s talking about exploring his unconscious – reaching back to the primitive parts of his mind, the way the Surrealists intended – but there’s a melancholy too. For its burbling, twittering sounds and lyrical settings alike, Rock Bottom by Robert Wyatt comes to mind, but this is the sped-up, should-be-sacrilegious-but-isn’t dance remix of Wyatt’s sub-aquatic ambience; alternatively, the Moonface album is what you imagine Young Marble Giants might have done next.

At the album’s centrepoint, ‘Fast Peter’ is the chirpiest moment, with Camilla from SunRub on backing vocals, cooing “she’s the one / the one that you want”; like several other Spencer songs (for Wolf Parade, and elsewhere) this offers a snapshot of Montreal’s Bohemian-set “…high on drugs” with no apologies or posing, just the slight pathos that you have to risk talking bollocks to actually open up (which could be that whole scene, in a nutshell). By the end, the mostly cheerful / occasionally wistful tones of the pipe organ are being used to create much more abrasive gasps and blasts, while harsher drums and guitars are added. On 'Loose Heart = Loose Plan', singing “…the sound of Talking Heads / makes me miss my friends” with a staccato delivery, Spencer sounds like he’s getting a case of cabin-fever from the long Canadian winter, and it’s the post-punk ’Heads he’s channelling here, or even PiL, whose industrial-dub version of Tchaikovsky’s ‘Swan Lake’ could be a template for the whole album’s instrumental incongruity. Overall, if Spencer wants to keep the fans guessing – mission accomplished. If he really wants to lose them, he’s going to have to try a lot harder to stop writing those tunes.