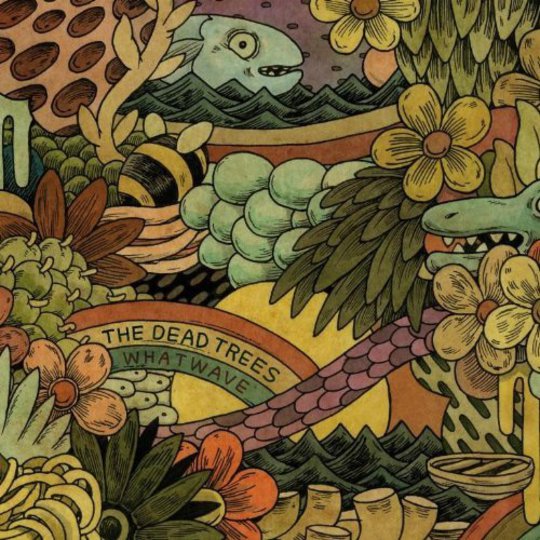 The Dead Trees have spent the last few years working on Whatwave whilst also being the live backing band for both The Strokes’ Albert Hammond Jr. solo ventures and also Fabrizio Moretti’s Little Joy. So for their second full-length release there’s an understandable fuzzy guitar bent. Having moved from the East Coast to become West Coast habitants, there’s a great cross-over of NY druggy chic and Californian coastal romance in Whatwave, which announces itself proudly from the opening bars.

'Slow Faze' brings low tom drums blitzed in reverb as a low, beat generation voice croons in with the satisfying warmth of a nice pink dusk. It is spoilt, however, by 'Slow Faze Fast', which jumps in like a barn dance version of Trail of Dead’s 'Relative Ways'. An amazing song to sound similar to, but in this instance a touch too close in delivery.

The rest of the album is an endearing dance through a collection of high quality slacker pop songs. 'My Time Has Just Begun' shuffles with a guitar downbeat and a chanted chorus of “No, you’re never having fun” that has all the swagger and desperation of Atlanta’s garage soul revivalists The Booze. 'Rayna' pounds in its rhythms with all the scratchy pain of the blues and some distorted slide guitar to complement. There’s a Lou Reed styled snarl to the verses but it bursts into a psychedelic Sixties pop song for the choruses. It’s a great smashing together of two slightly disjointed musical styles.

'Comfortable Kids' is a highlight. Here Cummings seems so have an issue with society kids snapping up all the success and is also somewhat miffed at his house being frequently used as a party pad. The humour bobs unassumingly over plucked vintage guitar sounds. It’s the kind of song The Cold War Kids would love to write; it’s stuffed with sunshine, cynicism and melody using only one vocal line and a sole guitar part.

Throughout there are moments that spark and feel like the past. 'Play Your Hand' starts with a driving beat that could be the Beatles' 'Get Back' before that laidback guitar pop takes over and it steps up a gear. 'Arrows' has melodies that literally struts, bass lines closely picked, maracas gently churning it’s as laid back as Santa Cruz, a bombastic harmonised chorus punctuates with brilliant effect, another snapping of style to grab attention.

Whatwave is a fine album and The Dead Tress a band who are able to write great tunes and thump out songs with seemingly little effort. The tunes have whimsy, harmonies and the arrangements that are powerful because of their self-confidence, there’s no decoration here just lean, well written, songs. Whatwave will document a summer gloriously.