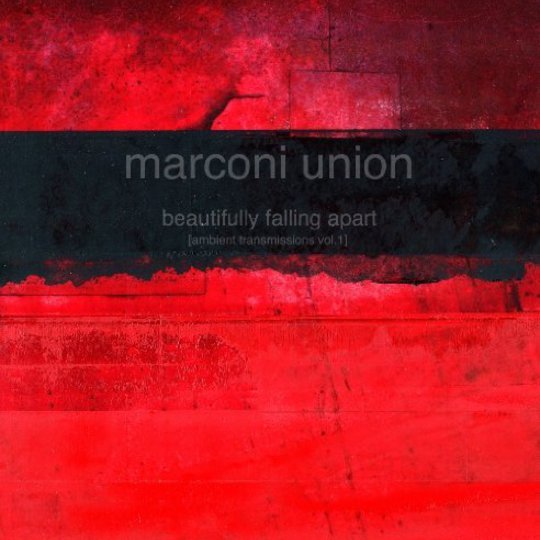 And so it begins. The opening eight minutes entitled ‘Breathing Retake’ blossom and unfurl themselves into a shadowy backdrop. A guitar line slowly slithers along. Clusters of distorted background noise disperse like rocks hitting water, while clattering percussion provides the chatter and illumination for this otherwise quiescent, dim scene. And there it is. After hearing those eight minutes you get the feeling that Marconi Union - aka Mancunians Richard Talbot, Jamie Crossley and Duncan Meadows - don’t aim to create music but instead provide ambient soundtracks for visual media (which they have done so in the past, and would surely feel at home with the likes of Donnie Darko, Blade Runner or Sunshine). Live shows shroud the band in darkness, visual art their only visible presence.

Reclusive and silent, their reluctance to give interviews mirrors the seclusion of the worlds they forge. These boys do it effectively, unlike another recent 'enigmatic' Manchester band. Seemingly they don’t have an identity. If they did, theirs would only be matched by the shadowy depths they create. Lazy comparisons would immediately point to Sigur Ros; those layering instruments that weave neatly on top of each other, added to those shimmering pads that add a natural humanity towards those alien vocal "ooh"s and "aah"s. Marconi Union describe Beautifully Falling Apart as a dichotomy between the beautifully serene and the harsh reality beneath it. If 2009’s Tokyo saw them envisage the city from an outsider’s perspective and 2008’s A Lost Connection found them delve deeper into the slick inner workings of the area, BFA is the band tearing down the foundations of such a city. Move out the way Godzilla!

Thrills aren’t created by the suspenseful build ups our Hopelandic others use but are instead created in the floating moments. It’s an inertia of euphoria as everything seemingly stands still, every touch creating a subtle yet significant shift. ‘Slow Collapse’ does little to move from the swell of throbbing pads as it keeps you in focus with the moment just before ‘Blue Collar Parade’ and ‘Losing the Light’ are doused in a treacle of atmospherics. The former is a sinister mass of prolonged hissing strings that channel into the optimism of the latter. It’s only at the end of ‘Losing the Light’ that the tranquillity of such glacial tones and drooling layers gets disturbed by the mechanical bulldozer of a robotic voice. Such contrast between songs brings forth Marconi Union’s true commentary – the constant battle between the beautifully natural against the artificial which collides both at constant odds. Moments of transition are stretched out gradually as to move our focus from the already immersed haze, each tiny detail adding and filling to the cracks.

And so it’s as we get to closing track ‘A Shower of Sparks’ where the same harmonic glacial glimmers and dripping notes emerge from the bulging cloud. As bells shimmer, they do so amongst synthesised drums, bringing the mechanical to the natural. In that sense Marconi Union create wonderful emotive music. This is music to not only relax to but music to ponder to.