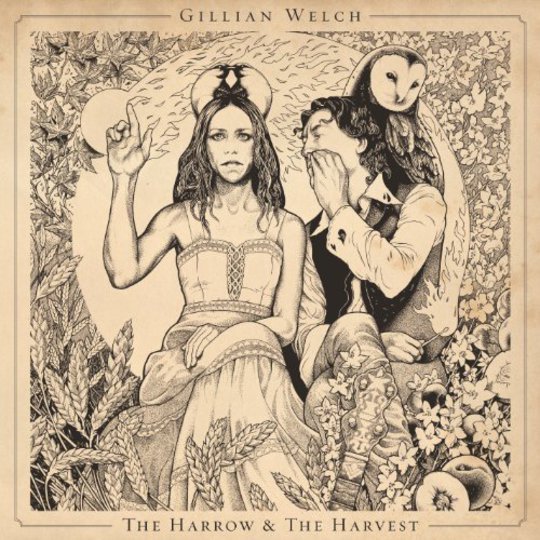 When an artist takes a long time to make a record, it’s hard to avoid thinking about said periods of time when the album's eventual release comes around. It’s hard to think of Chinese Democracy for instance, without recalling the tall tales that surrounded Axl Rose for many a year before the dismal disappointment of the LP was revealed.

With Gillian Welch, the gap of eight years since Soul Journey isn’t quite as mysterious, but it’s still rather maddening. Welch and her partner Dave Rawlings have certainly been busy, recording and appearing on stage with Conor Oberst, The Decemberists and the Old Crow Medicine Show, and releasing an album as The Dave Rawlings Machine last year. All this was all well and good, but it didn’t stop more than a few people asking just when this particular singer was going to return to her day job.

Thankfully, now that The Harrow & The Harvest has arrived, all sins have been forgiven. One listen to this timeless, quietly stirring album and you’d forgive Welch if she decided to release it on a label funded by arms dealing and child trafficking.

In terms of how The Harrow & The Harvest fits in with Welch’s own discography, it’s reassuring that the gap between this album and the last isn’t due to a burgeoning interest in dubstep. Not as musically diverse as Soul Journey, which suffered slightly as a result of a more varied palette, The Harrow & The Harvest is almost entirely made up of Welch and Rawlings’ guitars and voices, plus the occasional banjo and the hum of a harmonica.

The intensely intimate atmosphere of almost unnerving stillness that this sparse setting serves up is what makes Gillian Welch’s records so special, as if the two of them are set up in the corner of the room, telling their particularly stark stories. It’s not a record you can just put on the background and drift off to.

Welch’s voice, not as sonically exact as an Alison Krauss or as OTT as Adele, is perfectly suited to her tales of the downtrodden and lonely. When it stretches out to match Rawlings’ harmonies here on ‘The Way That It Goes’, goosebumps are not far behind. Obviously, it helps that Welch’s vocals are perfectly suited to her subject matter, her homely, intimate tones telling tales of the dispossessed as if she’s also trodden the same lonely path.

Almost as impressive as Welch’s plaintive vocals is the contribution made by Rawlings’ particular style of guitar playing. Constantly wandering around Welch’s rhythm, Rawlings plays in an instinctive, fluid way that is almost hypnotic to listen to. His playing that snakes around the vocal on ‘The Way It Will Be’ is almost like a constant solo that runs throughout the whole song, reflecting on the subject material with a sober grace. Throughout, Rawlings and Welch seem to instinctively know just what’s needed on each track, and despite the numerous solos included, nothing ever feels over-indulgent.

It’s this mix of simple, effective songwriting with exquisite musicianship that makes Gillian Welch so special. If the results are as finely crafted as The Harrow & The Harvest, she can take as long as she likes with the next one.