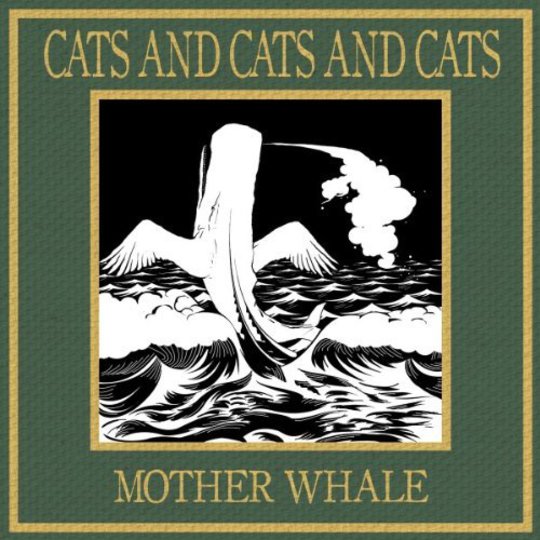 The problem with making a fantastic debut album is working out how to make a second one that’s just as good or, preferably, better. London’s Cats And Cats And Cats put out their excellent first record, If I’d Had An Atlas, almost exactly a year ago. It was by no means a perfect piece of work – the production sat awkwardly on the border between lo-fi and amateurish, and the band’s erratic ADHD style of songwriting became slightly (only slightly) repetitive. But these were minor quibbles. Overall, the wonky, soaring, sentimental math-pop of If I’d Had An Atlas showed a phenomenal amount of imagination, brilliant ambition and was, quite simply, tonnes of fun to listen to.

It’s tempting to sum up Motherwhale by simply repeating that synopsis of its predecessor, because the fundamental facts of each album are the same. But that would ignore the progress that Cats And Cats And Cats appear to have made as a band in the last year. This new record sounds fresher, crisper and tighter from the start. The 13 tracks flow together more naturally, combining to write a far more coherent manifesto on what sort of band Cats And Cats And Cats want to be.

The everything-including-the-kitchen-sink approach of If I’d Had An Atlas, which at times saw the ideas for ten different songs pasted together as one folky guitar-pop epic, has been toned down. Motherwhale is more relaxed and its ideas are developed, instead of being abandoned after a few bars. Essentially, Cats And Cats And Cats have dropped the bits that they can’t make songs out of and made more effective use of what’s left.

For example, opener ‘Speckled Eggs For Speckled Lovers’ has a simple binary structure, as a beautifully sleepy string section clashes sublimely with great stuttering thuds of brass and crashing chords. Musically however, Cats And Cats And Cats are as complicated as before, with mind-bending, unpredictable power chord stabs that rival the jerkiest moments of Biffy Clyro’s Infinity Land. On ‘The Seaweed Brother’ this is combined with pinches of violin to soften the blow of such vicious complexity, only for the soothing effect of the strings to be cancelled out by a superbly mad breakdown of dissonant chords.

There is no risk of Cats And Cats And Cats overdoing things on Motherwhale, as they pause the onslaught of hooks far more often than they did on If I’d Had An Atlas. They give the listener a break on the lovely ‘A Song For My Mother, The Whale’, with mass sing-along vocals and an ambient rumble of distorted chords which, strangely, would work well on a Fence Collective compilation. Later, on ‘For The Love Of Mechanical Bears’, the dreamy sound of an accordion accompanied only by a xylophone lulls you out to sea.

Motherwhale concludes with ‘Come Home’, which over the course of its 11 minutes shows what Cats And Cats And Cats’ can do with, seemingly, very little. For the most part it is a gentle lullaby of clicking melodies and affectionate lyrics, which spills over into another mass sing-along and huge, crackling, pounding drums.

This doesn’t mean that Cats And Cats And Cats have completely mellowed out though – these more spacious compositions are still atypical on an album that is full of wonky guitars, squawking brass and enormous sing-along harmonies. Motherwhale combines all of the most interesting and downright fun aspects of Neutral Milk Hotel and ¡Forward, Russia! to be another album of deeply intelligent pop music with a refreshing homemade aesthetic. That’s not to mention the added confidence that Cats And Cats And Cats display and the wider palette of songwriting they explore. They truly are one of the finest hidden gems in British music today.