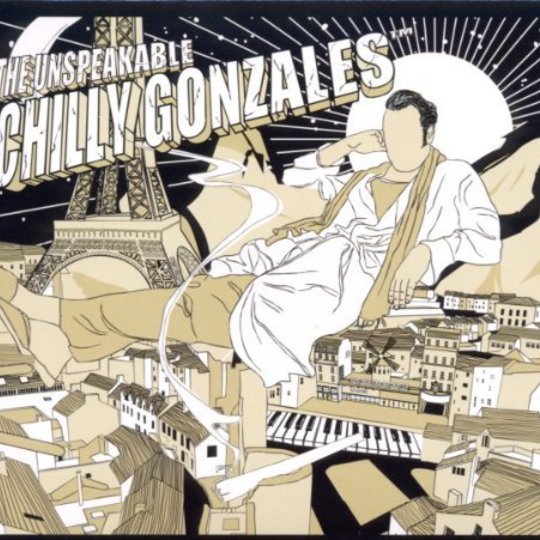 If you've never listened to Chilly Gonsalez before, this might not be the best place to start. Not that it's bad, but as a showcase of Chilly's talents The Unspeakable... is not the most comprehensive, and neither is it all that accessible.

Never one to stick rigidly to convention, on The Unspeakable... the Canadian has aimed to create something pretty rare. Over a nine-song, sub-30 minute runtime there are no beats and not much bass to speak of. As the press release puts it, this is 'the first-ever all-orchestral rap album.' We're repeatedly reminded on second track 'Self Portrait' that Chilly considers himself to be a "musical genius" - and with this album he seems to be attempting to prove it's no empty boast. Roping in his film score-composing brother Christopher Beck (Joss Whedon's collaborator on the legendary musical episode of Buffy the Vampire) to assist with arrangement, together they've created a selection of tracks that owe an acknowledged debt to the likes of Phillip Glass (maudlin, repetitive piano features heavily) and Ennio Morricone (ditto spaghetti western strings) - and despite diverse influences, it all sits together comfortably and feels very much like a consistent, well-conceived piece of work. The lack of any electronics or percussion (bar orchestral timpani) do mean it’s not much of a party album, and it’s unlikely that any of these songs will get played in any nightclub as there’s nothing much to dance to. But then, that’s not really the point.

Lyrically, it’s (pause, inhale sharply) OK. There’s a spot of bad punning, a few clunking homonyms (“I want to be Tony Soprano but I’m more known for tones on the piano”), some unnecessary line repetition that comes across as a bit lazy. The subject matter could do with a bit more variety - on pretty much every track the main topic seems to be Chilly himself. However, despite this it can’t be stressed enough that he is a great rapper - even when at his most naval-gazey he never forgets to be entertaining and always manages to raise a few smiles, even on the more miserablist tracks. When he occasionally risks teetering into pomposity he pulls it back with a ruthlessly deployed sense of humour and a deep, unashamed love of pop culture: “I see the truth, in Eric Cartman/In Salvador Dali and Dolly Parton/And even Chris Martin.”

The Unspeakable... is good, sometimes very good, but it falls short of being great. Nevertheless, if this really is this world’s first orchestral rap album, here’s hoping there’s more to come.