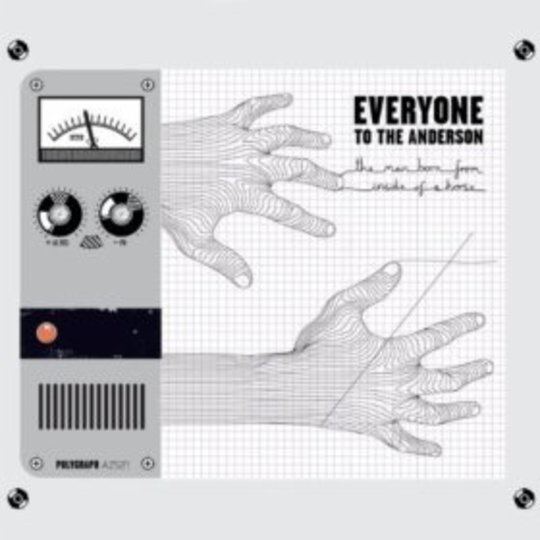 Everyone To The Anderson sound like an ignored shadow of another era. That group of bands that never broke through but inspired their more successful peers. These bands always exist and often they’re the greater talent. A Brighton three-piece, Everyone To The Anderson initially sound as though they're flitting between the rush of Shellac’s power and the intricate guitar touch or Don Caballero. They sound like this because people who like their guitars demented and graceful will at some point have heard those names in the air. But with Ben Gregory’s vocals ringing out as well-pronounced pleas of despair and teenage whimsy, bands like Jets To Brazil and early The Promise Ring come screaming out. Undoubtedly American, undoubtedly miserable and beautiful for it. The Man Born From Inside A Horse is the sound of the underdog, intense, inspired and casual in its graceful artistry.

From the opening of ‘High Brow, Low Brow, No Brow’ the pairing of detonated chugging and pronounced screaming is laid out, proudly. Side-sticks add triplets of percussive patter into bass notes that solely plunge down and chords counter upwards. Ben exalts “He talks fine, he talks a fine game” with pure spite. In ‘So You’re Saying There’s A Chance’ lyrics such as “Kiss the earth with dry lips/Never leave these shores again” feel coddled but lonely, like Blur’s ‘End Of A Century’ (“We kiss with dry lips/When we say goodnight”) and sound like the pure angst in Jets To Brazil’s ‘I Typed For Miles’ (“They’re playing love songs on the radio tonight/I can’t relate to that right now… You’re playing love songs on your radio tonight/I don’t get those songs on mine/You keep fucking up my life”). It’s overt, unabashed, pain. The lyrics would like to be happy and are certainly striking, but they’ll never defy their nature enough to rise from depression.

Everyone To The Anderson punch so deftly because in their graceful sludge and tight delivery, the music matches the sentiment. Ben’s voice is most definitely English and living as an alien in its abode. He shares a tone with Metronomy’s vocalist. Just as Joseph Mount puts a flicker of eccentricity into his loving Hall & Oates neck-bob dance, so Gregory’s voice has an interesting timbre, further pronounced by the fact that it’s smashed into an American guitar sound. Art Brut do this, but without irony. No ‘rock’ to rock out to, just low-end thrash and balletic guitar lines as Gregory shouts loudly. This is neck-bob music too, but to spikes of noise and rumbling bass power, not slick indie-pop hooks.

In fairness, there’s nothing here musically that hasn’t actually been done. It’s three guys playing music extremely well with lots to say. This is the first time this sort of thing has been done with an English bent that didn’t feel forced and doesn’t sound ill fitting. It’s nice to hear people unravel once and have their fears played out within the extremis of noise. It’s a an album that flies by and its brash melodies are matched with explosive arrangement, providing a supremely strong first offering.