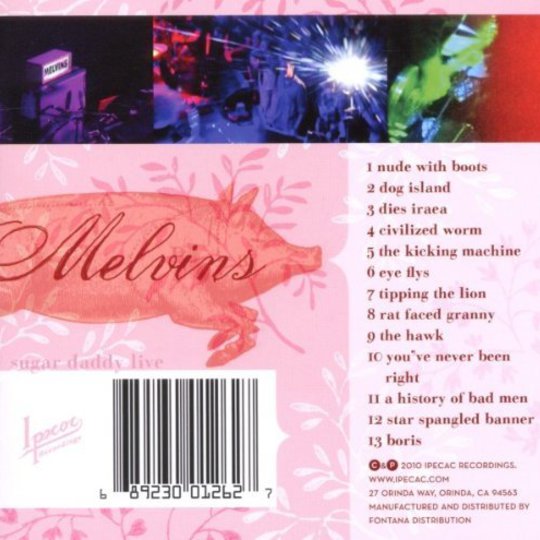 The dust in Seattle has long since settled, but the 'godfathers of grunge' Melvins are still stirring up the sludge with their latest release Sugar Daddy Live. Formed as a trio in 1983, the influential hard rock group has developed into a four-piece in recent years, adding an extra drummer for a percussive impact that matches the famous growl of their guitars. The new live album, drawing in large part from their recent work, notably Nude With Boots and (A) Senile Animal, proves the much-lauded band remains a vital creative unit that has not doddered off to the rock'n'roll retirement home.

Melvins' sense of the preposterous is alive and well in the first two selections of the set: 'Boris' and 'Star Spangled Banner.' The former is a 12-minute bone-crunching ode to slow metal. Wily-haired lead guitarist Buzz Osborne (or 'King Buzzo') deals out nasal-inflected, guttural groans. Three-fourths of the way through the piece, the composition dissolves into a experimental noise breakdown that holds the line between form and formlessness. As if to flip off their own metal virtuosity, the band lowers the bar considerably with an a cappella version of the American classic 'Star Spangled Banner.' Metal rockers aren't known for their vocal gifts (Metallica's lead vocalist James Hetfield once described his job as 'screaming in key'); Melvins milk the song for a comedic flourish at the end of the pathos-filled 'Boris'. After more than 20 years on the road, the band knows how to entertain a crowd, variously the jester or the infernal dramaturge as the situation demands.

'Rat Faced Granny' from (A) Senile Animal fires up the speed metal. Known more for slower, sludgier numbers, Melvins can crank it out as well as any of the young burners. The addition of the second drummer gives the band a more primal, rhythmic punch as the song surfs ripcurls of percussive breakdowns. 'Dies Iraea' casts deep into the history of Western music with a metal re-imagining of the thirteenth century Latin hymn. Nude With Boots' title-track closes the set with a hyper-active power ballad designed to elicit the sign of the horns from every last sweaty hand in the room.

Sugar Daddy Live reveals a picture of a storied band that is still finding ways to reinvent itself. Live albums can be a mixed bag: Melvins do it right with studio-level sound quality and a fan-friendly setlist, mixing the hard rocking firepower, humor, and raw emotion that've sustained them all these years.