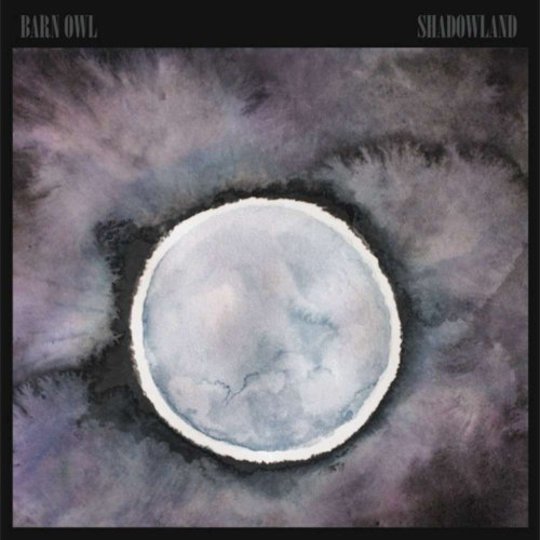 Hailing from the murkiest depths of San Francisco's 'nu-psyche' scene, on their fourth foray into otherworldly psyche-drone Evan Caminiti and Jon Porras have abandoned the dusty Badlands of yore for higher altitudes, thinner air, altogether wispier oblivions, and roughly the sound the turning earth makes when no one is looking. There's definitely something going on behind your back anyway, something unknowable; such are the bottomless mysteries awaiting you on Barn Owl's Shadowland EP.

More in tune with Arvo Part than the doom-metal longform of bygone outings, the pair dial back the incidences of clanging terror for an eerily fluid, celestial bent on 'Void and Devotion', the first of three tracks. Eeking and palpitating on a dreamy arpeggio, all types of pareidoliac apparitions curl from the darkness, while underneath its gentle arc quivers acidic sustain and the stereo feedback of some unseen leviathan, spindly synth lines coalescing like the birth of a thought. Spell-binding. When they finally let the genie out of the bottle towards the end, it's like the jaws of some giant stone idol falling open, unleashing a voice-of-god tempest. Om! Like everything Barn Owl, it's pure, inviting but daunting.

Essentially an extended interlude, on the comparatively shorter but no less immersive title track the duo have imagined some order of mystic pilgrimage, managing to be both expectant yet wandering and lost; hazily inert but rolling with inflated intent. Beginning and ending with a lone-star guitar theme, repeating inexorably, soft and steady, over a deeper-than-deep bass thrum, the track holds its stare with oscillating degrees of intensity but unflinching menace. The obvious reference point is Nick Cave and Ellis' soundtrack work, specifically The Road, with overtones of ex-Dakotan drugniks, Gowns.

Going the Emeralds route or as it's otherwise known, doing a Tangerine Dream, 'Infinite Reach' is indecently transcendental. The first moan of old oak guitar comes away from the establishing slur like a sticky mat from linoleum, before acculturated with wave after wave (what the band call 'peace-zones') of crackling, dewey, machine-tooled friction. Between the ever-increasing bass weight and the singing bowl vibrations, plucked guitars effloresce from the smoothest of surfaces, So sedating and centring is it, the cutting peal midway though lands like a fender bender in a day dream.

With Barn Owl, nothing is worth rushing. Like watching the rising tide or the sun come up, you almost have to look away and then back again to chart the progress. Their compositions evolve almost invisibly, putting paid to the accusation that quality drone is a heavy-handed craft, and at their heart tell of the rising, fear-stricken exhilaration of being interlopers on a foreign plain. Shadowland is too basic in essential meaning to be great art, but it's not every day you spend a good portion of the evening with your eyes closed. You can't teach that.