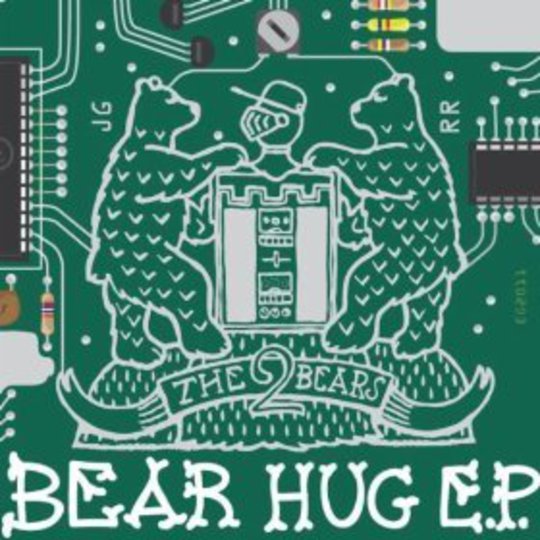 For all the virtuous qualities Hot Chip undoubtedly possess, they are a hard outfit to dance to without looking like a complete tool. That’s half the fun of them, but you do have to wonder how many mating rituals have been upset by their twitching beats and awkwardly heartfelt lyrics. Fear not though, The 2 Bears, an offshoot comprised of Joe Goddard and Ministry of Sound radio show host Raf Daddy, are here to resurrect that particular grievance with a furry embrace.

“All you out there on the floor, gonna get you in my paws and give you a bear hug,” deadpans a digitally grizzled fella on ‘Bear Hug’ and, despite his forwardness, you’d be a fool to decline the offer.

For those who haven’t followed The 2 Bears’ series of consistently mobile EPs, Bear Hug is a perfectly representative starting point. Curious Nature was a more melancholic affair, Follow The Bears slightly coarser but really this house styled duo just want to make you move, and judged purely on toe-tapability this is their best release to date.

Where Hot Chip shuffle, The 2 Bears slink. ‘Take A Look Around’ cruises into your bodily appendages like a slow kick into consciousness, caressing those dancing feet with a steady supply of groove-worthy synth. Contrastingly, ‘In My Brain Is Like A Computer’ cavorts into you like a polyrhythmic proposition, grinding its throbbing bass into your limbs with aggressive abandon. ‘Banger’ is let down by a near eight minute duration however, which deflates the lithe excitement of its electronic squiggles into a limp ending.

Naturally, it’s ‘Bear Hug’ that’s the highlight, its sense of humour elevating it above the occasional slip into trad-dance fare, “It gets lonely in the woods but right now I’m here in the hood, let’s have a bear hug.”

As side-projects go, The 2 Bears are impressively conceived and expertly executed. There’s nothing on the Bear Hug EP that treads too far from hallowed Hot Chip turf, or Goddard’s own solo ‘Harvest Festival’ LP for that matter, but it’s a romp worth pulling shapes to regardless. Certainly a record worthy of a ‘smarter than the average bears’ sign off.