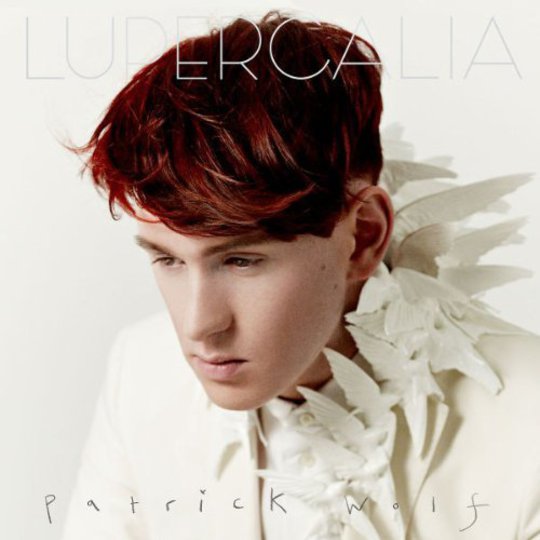 Patrick Wolf has always been one of those slightly awkward artists. Unashamedly pop, but slightly too weird for the homogenised chart-swallowing masses; singing about the universal pop subjects of love, loss and general bewilderment at the world, but with almost unparalleled, stubborn specificity in the personal dramas to which the lyrics refer. In other words, he’s exactly what most people’s dream of a ‘proper’ pop star is… but with that comes a certain reputation to maintain.

His last album, 2009’s The Bachelor, was an instruction manual for how to find yourself through sex, drugs and general hedonism, and came about at a time where Wolf was professionally and personally at a crossroads. So having since become engaged and no longer encumbered by the need to wear business and creative hats simultaneously, follow-up Lupercalia, then, can only raise one question: is it possible to maintain, or even expand upon, a reputation for being a complex and honest performer when all you want to sing about is how happy you are?

One aspect of Lupercalia that’s immediately apparent is its relative straightforwardness, sonically speaking. Certainly in comparison to its immediate predecessor’s grandiose, electronic kitchen sink soundtrack to a descent into the underworld, it’s – superficially at least – a more distilled, less chaotic effort. In particular, although some elements of The Bachelor’s electromania certainly remain, here there’s a definite emphasis on live band instrumentation and limited faffing about for the hell of it. This is most apparent in tracks such as ‘Bermondsey Street’ and ‘The Days’, but it’s fair to say that nowhere on this album does Wolf appear to have felt the need to put an artfully-mined donk on it.

Lyrically, the album starts at the point of ‘happy ever after’ and explores what happens afterwards – which is usually where the real fun begins. ‘The City’ is a full-on statement of intent, a determination to not let the distractions of crappy urban mayhem derail a relationship with notions of ‘what should be’ versus what actually is. Elsewhere, ‘Time Of My Life’ finds Wolf declaring it “time to wake up/Find my soul”, realising that sometimes it’s far better to be single without a clue than taken and all too aware of what you’re missing. It’s an album about finding joy in life’s dramas, and realising that a life spent running away from the inevitable personal fiascos is no life at all.

‘Together’, a mid-tempo disco number that’s the album’s most solidly electropop track, lays any doubts about complexity to rest. It is, in essence, the slightly drunken make-up call after a bust-up with your other half. But where the story takes a turn is in firmly eschewing the clichés of such conversations as declarations of incompleteness, with lines such as “I can do this alone/But we can do this so much better together”. In a way it’s the mission statement of the album as a whole: the idea that true love eliminates clinginess, empowers rather than emasculates, is something far bolder and complicated than the ‘I can’t live without you wibblewibblewibble’ so much so-called ‘emotive’ music gets bogged down in. And it does make you wonder why that is, particularly when Wolf makes it seem so easy.

Comparing Lupercalia with any of its predecessors is both inevitable and somewhat pointless: Wolf as an artist is so determinedly changeable in his output that it’s rather like comparing an apple with a toaster. But it’s also inevitable in the sense that despite all that, his overall body of work dares the listener to try and view it as a whole. The only realistic option is only ever going to be to judge it on its own merits. So in the end, Lupercalia is straightforward in its sound, complex in its outlook and unabashedly heartfelt. It might tend more towards solid songwriting than reinvention, and might not quite reach the heights of lunatic brilliance of its predecessor, but as far as most people's dream of what a proper pop album should be, Lupercalia certainly comes closer than most.