Together We Were Made 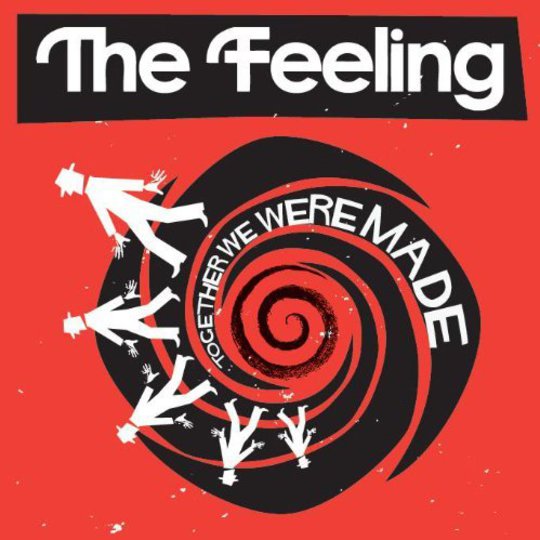 If by some miracle you happen to be a band member of The Feeling and have made the decision to peruse this review, congratulations on your capacity for critical punishment. Either that or enough time has passed for the scars from these particularly vicious spankings by Mike Diver and Dom Gourlay to heal. If you hadn’t read either of the above before then, er, sorry...

Still, chin up! I was one of the 'boring wankers' who actively enjoyed your debut album. A little Prozac pop with ridiculous lyrics, “You took me southwards on a plane and showed me Spain or somewhere”, never put me off The Sonics or whatever ‘serious’ music I was listening to at the time. If ‘I Love It When You Call’ hit the radio, I’d actively turn it up and sing along with cheerful abandon. Some of your singles I have found to be good (‘I Thought It Was Over’) some of them not so (‘Rosé’). Rest assured then, Together We Were Made has received a fair hearing.

I say all this not out of some active desire to pitch myself against those who so vehemently object to your existence but because, when I say your third album is just alright I do not wish for that statement to be interpreted as the inevitable product of a deep-seated bias. I get why ‘Set My World On Fire’ was chosen as a lead single: its placement at the time of writing on

More worryingly, it’s way too serious. Whilst to some The Feeling have been a byword for 'pure despair', to me you represented 'pleasant merriment'. Now on hidden track and album closer ‘Hardest Stone’ you have decided to mention a “suicide train” and someone with a kind demeanour needs to make clear this is not on. Silly is your stock in trade, you should be aiming to antagonise your detractors not placate them with weighty epochs. ‘Dance For The Lights’ is more like it. Replete with a bassline from the carnival and synths from the disco, the song flits in a satisfying loop through its given speaker system. Followed by the awkward ‘Another Soldier’ however, it forms a hesitant start to the album. Said track confirms that this Horsham six piece are probably one of the least battle-ready outfits in British pop.

Like most Feeling tracks, it takes a lot to actively hate ‘Build A Home’ and ‘Leave Me Out Of It’ but unfortunately there’s little about them to love either. A well-written groove here, some amusingly over-the-top sentiment there; overall it’s lacking in the hummability stakes. ‘Say No’ is the pits, straight-laced, stagnant and lead by the dire lyric “All you ever do is say no”, how it made the album is beyond me. There are some highpoints, ‘Searched Every Corner’ should undoubtedly be the next single. All twitching electronics and falsetto backing vocals, it’s a step back to The Feeling some know and modestly appreciate. ‘A Hundred Sinners (Come And Get It)’ is a showtune and proud, whilst ‘Another Life’ is a kitchen sink ballad that actually clicks. Probably because it doesn’t sound like the work of a band half-heartedly failing to embrace its ‘dark side’.

The ‘dark side’ of The Feeling should be waking up to discover there’s no milk for breakfast, the bus into your zoo-keeping job is five minutes late or climbing on board to find that girl you had your eye on is sat next to her boyfriend. Not all of the above rolled into one. I never thought I’d be writing this but on Together We Were Made, The Feeling need to lighten up a little.

The Pains Of Being Pure At Heart, Fanzine at Birmingham HMV Institute, , Tue 14 Jun