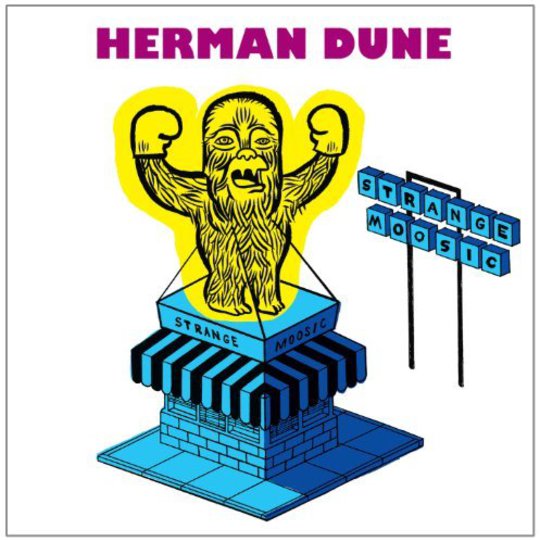 Herman Dune’s latest music video is quite fun. It features a weird little blue yeti creature wandering out of his forest dwellings and hitching a ride in a fancy white sports car with handsome Jon Hamm (Mad Men’s Don Draper). A surreal buddy movie road trip unfolds, culminating in the weird little blue yeti creature and handsome Jon Hamm’s attendance at a Herman Dune gig. It is certainly memorable. Well at least the images are. After having viewed it only once it would be possible to describe in detail every exact event of the video. If then asked to recall what the song was like, however, it would be difficult to come up with anything much more elaborate than “it sounds a lot like Herman Dune”. Still, the endorsement of handsome Jon Hamm may earn the band some extra fans who, as newcomers, may find much to enjoy in Strange Moosic. But for those familiar with the group’s early achievements, there are few surprises here as well as further disappointments.

There’s more sheen than on previous records and HD’s sound has been subtly adapted. The warm splashes of brass that complemented 2008’s Next Year in Zion have been dropped. Instead, there’s some shimmering Edge-esque guitar effects, a nice pedal steel part courtesy of Richmond Fontaine’s Paul Brainard, and various organ sounds ranging from jolly and rolling to dark and dramatic.

Jonathan Richman remains Herman Dune’s chief influence. From their beginnings the band lifted his polite, shuffling, deceptively amateurish musical style, aped his vocals and attempted to ape his wry, observational lyrical skills. Yet the Richman fixation would be a better idea if it wasn’t for the fact that Richman himself is still going strong. O Moon, Queen of Night on Earth, released at the tail end of last year, showed the one-time Modern Lover in fine form and emphasised the futility of trying to imitate him… at least while he’s still alive (hopefully he will remain that way for some time).

And lyrically, Herman Dune are frankly not up to it. Maybe they were earlier on, but their powers have dwindled since 2006 when David-Ivar Herman Dune’s sibling Andre departed the band, as examined by Jeffrey Lewis in his affectionate tribute ‘I Miss Herman Dune with Both Brothers in the Band’. The love songs here add nothing new to the art of the love song; ‘Monument Park’, for example, with its bland chorus of “Be my baby tonight”. In ‘Just Like Summer’ David-Ivar falls into the same trap as numerous lyricists in the past who have, a few albums down the line and with their inspiration drying up, started singing about the boo-hoo self-pitying miseries of life on the road. At least he tries to disguise it as a second hand account: “I heard a star on the rise from Ontario/ She said ‘I love singing but touring is a bummer’/ And ‘when I get home it feels just like summer’”. ‘My Joy’ includes a rare moment of humour (an ever diminishing presence in David’s increasingly dour, self-obsessed, desperate to be taken seriously poetry) with the line “I was crying to you that my heart had been broken/ You were dancing like Christopher Walken”. Closing track, ‘Magician’ misfires badly: presumably an attempt at a poignant break-up song, it is actually a rather sinister display of unpleasant emotional blackmail, with David promising that he will consume lots of dangerous drugs, drink like a fish, sink like a stone and die “if we split”. Perhaps an appropriate response to such malicious attention seeking would be to encourage him to put his money where his mouth is and go through with it if he’s going to be that vindictive and immature about the whole palaver.

If all this sounds harsh, Strange Moosic is still a neat, summery record and there are worse ways to spend 40 minutes of your life. It is better than the long and indulgent nadir of 2007’s Giant and more or less on a par with Next Year in Zion. But it cannot be denied that there is still something missing, and it’s a hole that even a weird little blue yeti creature and handsome Jon Hamm cannot fill.