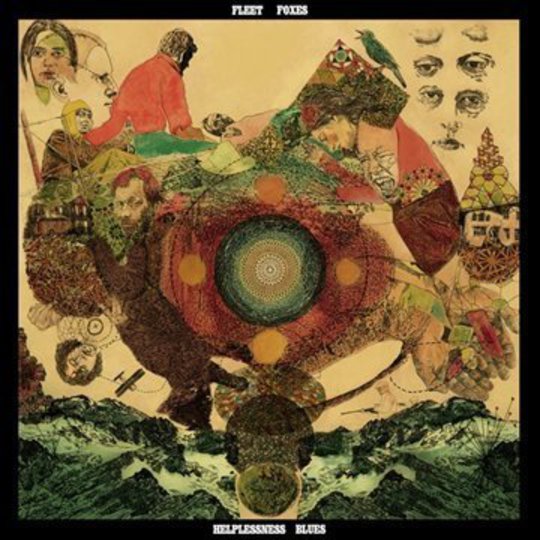 There can’t be that many downsides to releasing a universally acclaimed, platinum selling debut album, but whatever they might be, it seems Robin Pecknold has been through them since the release of Fleet Foxes in 2008. Strained personal relationships, tour exhaustion and creative difficulties have all been mentioned around the writing and recording of the Seattle band’s second LP, and you feel the band themselves have given a sly wink to their poor-me problems by naming the album Helplessness Blues.

However, you wouldn’t think there was too much wrong in Pecknold’s world with your initial impressions of Helplessness Blues. It’s a richer, more diverse sound than their self-titled LP or the Sun Giant EP, with a sprightly fiddle on second track ‘Bedouin Dress,’ a scronking sax breakdown on ‘The Shrine / An Argument’ and ‘Sim Sala Bim’ breaking down and going all ‘Suite: Judy Blue Eyes’ on us.

The cornerstone of what made Fleet Foxes connect with so many people originally is still the vocals though, and throughout Helplessness Blues they provide plenty of dynamic thrust. There’s never any pretty harmonies just for the point of it with this lot – they’re always part of a surging change of pace, a dreamy mood setting or a forceful moment, and that’s what makes them so powerful and so natural sounding. As ‘The Plains / Bitter Dancer’ builds from nothing into a wall of wordless vocals, it’s hard to not be swept into the reverie.

Behind the beauty though, Pecknold and the band’s insecurities shine through in the lyrics. Again and again, the rural idyll of a simple life is used by Pecknold as a cure for his troubles, most explicitly on the title track when he dreams of owning an orchard where he can “work till I’m sore.” The idea that as a young man Pecknold should be doing something with his life, but he’s not sure what, is the main driving force of the lyrics, cropping up again and again with a honesty that marks him out from peers who might not be as open.

Nash’s talent was always in ensuring that there was a solid pop heart to the dreamy folk rock he wrote, and he’s got a fine heir in Pecknold (who actually donated a track to a Graham Nash tribute album last year, alongside Vetiver, Bonnie Prince Billy and many more current US folk-rock leading lights). The most direct comparison on this record is the campfire confessional ‘Blue Spotted Tail’, but that often unrecognised influence runs throughout Helplessness Blues, as Pecknold attempts to make sense of the world around him and retreats to the ideal of the simple country life in the process.

It’s this sense of being allowed a window into some deeply personal moments that ensures this record can stand confidently next to its predecessor, and what will ensure that after all the talk of strife and self-doubt, it’ll be remembered for. Fleet Foxes might have put a lot of worry into the making of Helplessness Blues, but thankfully it was worth it.

In Love With Oblivion