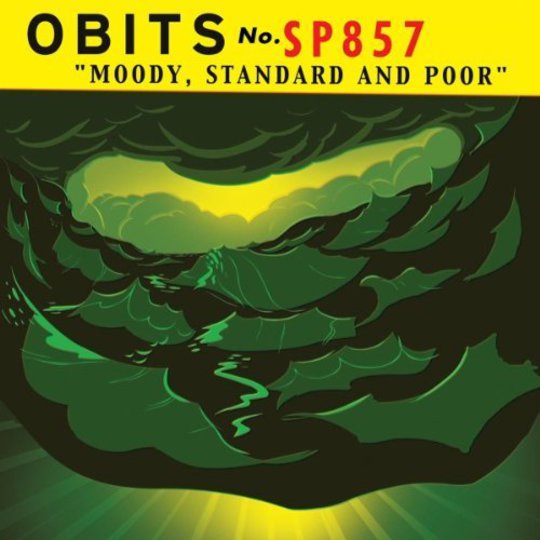 Subtlety is not something you would typically associate with a punk band. Moody, Standard and Poor, the second album from Obits is just that: a subtle punk rock album. On first listen, there doesn’t appear to be an awful lot going on. There’s a lot of space. The songs are allowed to breathe. Nothing is hectic or in your face, or trying to grab your attention. There’s no yelling. There’s barely any distortion. A second listen reveals that there is something going on here; that there’s something bubbling under the surface, working its way under your skin. The odd riff or hook jumps out at you and catches your attention. Suddenly, where you previously felt there was nothing, there appears to be something. There appears to be a very relaxed, very subdued, but nonetheless very engaging album. A very good album.

At this point in the review, let’s throw in a metaphor as a way of describing what Moody, Standard and Poor sounds like, without actually describing the actual sounds held within the recording. Think back to the last time you were at a party, and there was that incredibly obnoxious yet inexplicably popular guy there. You know the type - constantly yelling, throwing his weight around, spilling beer, hitting on girls. The kind of guy who thinks he’s really cool, but obviously tries too hard. You know the kind of guy. You’ve probably got a pretty good mental picture going on. Maybe you’ve pictured him in a t-shirt with cut off sleeves. Or a headband. A real douchebag. Well that guy isn’t Obits. Obits is the aloof guy at the back, who doesn’t talk to anyone, he just hangs out. Maybe he smokes. He would make smoking look cool. He’ll only move from his spot when someone starts playing The Sonics, at which point he’ll jump up, bust out some moves, then leave with the best looking girl. Obits are that band. They are aloof. They are comfortable. They are relaxed. They’re just down right cool.

You’re probably interested in a little bit of context now. Everyone loves context. What’s striking about Moody, Standard and Poor is how timeless it sounds. Moody, Standard and Poor somehow manages to sound both old and new, like finding out a lost classic is actually a hot new band. Realistically, it could have been written and released at any point in the last 50 years. It exists almost outside of time. It would be possible to contextualise it within any of the major (or minor) rock movements. Sixties garage punk? ‘No Fly List’ ticks that box. Seventies proto punk? 'You Gotta Lose’ goes there. 80s melodic hardcore? ‘Beggin Dogs’. Early Nineties indie rock? ‘Shift Operator’ covers that one. Yes, Obits are heavily indebted to both garage and surf rock, with the twanging, reverberating guitars. Yes, the drums are crisp and clean. Yes, Rick Froberg still has one of the best voices around.

Wherever you want to put them, Obits fit. But the do we really need to put Obits into context? For Obits exist here and now, not in some long gone trend or fad. Obits are at that age where they don’t really care about sounding new, or on trend. To say that they’re veterans would imply that they’re past their prime. Certainly, their collective CV (Drive Like Jehu, Hot Snakes, Edsel) might suggest their best days are behind them, but Moody, Standard and Poor says otherwise. Dave Grohl is a veteran - the world does not need another record from him. The world needs Obits.