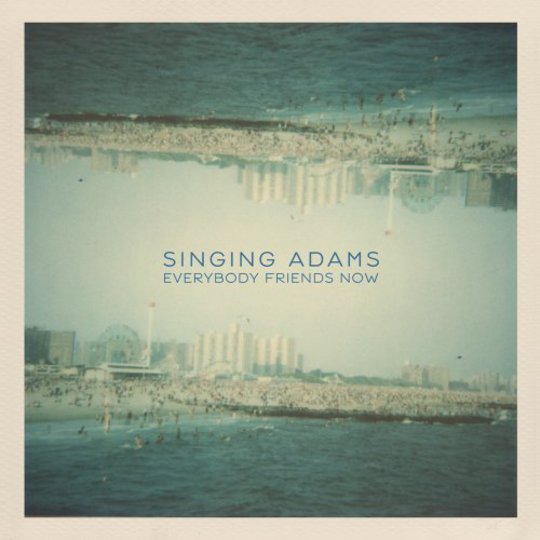 When bands split, and the former band members go on to different projects, it must be hardest for the singer to forge a new identity. Not only because the new project will have a significant element that remains exactly the same – the voice – but also because rock lore has taught us that the split is almost inevitably the fault of the megalomaniacal frontman.

However, that’s not an accusation you’d level at Steven Adams, formally of The Broken Family Band, and now the driving force with Singing Adams. His former band shaped his barbed, darkly funny lyrics into alt-country shapes, gradually stripping away the faux-Yank accents and slide guitars to become a more conventional four piece. They might have initially seemed to be of little consequence, but after a few listens TBFB tended to inspire slavish devotion. They were the secret favourite band of a sacred few, mostly men, mostly with beards.

With Singing Adams, the same initial reaction could seem commonplace. At first, Everybody Friends Now seems pleasant enough, but it’s only after a few spins that Adams’ way with words really shines through, especially as the spikier edges poke through.

Musically, the record takes off where The Broken Family Band left off, adding a slightly poppier edge to the standard melodic indie template – there’s brass! And backing vocals! The band he’s put together features former members of bands that often used to tour with The Broken Family Band – Absentee, Saloon – so you soon realise you’re not in Them Crooked Vultures territory. It’s exactly as you might expect things to be.

Once you’ve realised this, you can get on with enjoying Adams’ way with words. The finest example here would probably be ‘Old Days’, in which the bitter singer reflects on his past glories and looks forward to his encroaching middle-age. “I used to be someone/I had a band”, he laments, “And now I’ve seen my flame splutter out/I’ve got no guts/You should’ve seen me in the old days”. It might not seem funny written down, but there’s a wryness to Adams’ voice that balances the tragic with the ticklish.

This clever balancing act continues throughout – the following track ‘Injured Party’ berates its subject with the chorus “I don’t need this/I’ve been to a funeral/I don’t need this/I’m getting married in the morning/I don’t need this/I’m heading to the hospital”. Imagine a bouncier Bill Callaghan and you’re on the right track. ‘Giving It All Away’ asks women to stop throwing themselves at the singer – an unassuming man from Cambridgeshire, not one of the Followhill brothers – if that doesn’t give you an idea of the territory we’re in, then nothing will.

So, it’s hardly a major leap in any direction for Adams, but rather another environment in which he can craft his particularly English way with words. As the main driving force behind all elements of the band, songwriting, production, probably tea making as well, he’s probably happy with how it’s gone on this particular record. If you were a fan of his previous, or just in the market for something with guaranteed longevity, then you’ll probably be happy too.