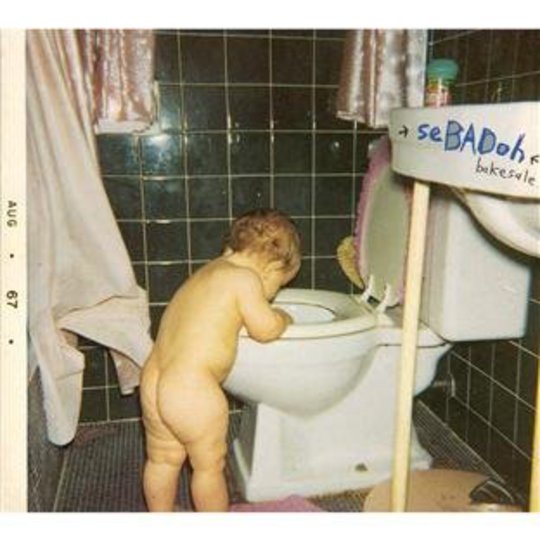 In 1991, Nirvana exploded from grungey obscurity into the musical stratosphere with a willfully commercial record, featuring on its cover a naked baby swimming towards a dollar bill. Though Kurt Cobain strove to conceal it behind such attempts at irony or sarcasm in order to maintain some remnants of integrity, the image is symbolic of the singer’s later regrettable unwavering and determined ambition. Three years later, Sebadoh released their most commercial outing to date featuring on its cover a grainy photograph of a naked Lou Barlow, aged one, reaching into a toilet, which is perhaps symbolic of the fact that Barlow was never going to quite get it right. You won’t find any dollar bills down there, young man. It was for the best in the long run, of course. Barlow may not have become a legendary rockstar multimillionaire, but nor did he end up marrying a bonkers harpy before retreating to his isolated mansion and blowing his own brains out whilst listening to R.E.M.’s Automatic for the People.

After several false departures, founding Sebadoh member Eric Gaffney finally left the group for good prior to Bakesale, taking with him some of the schizophrenic eclecticism which had characterized the band’s sound (in an example of history repeating itself, Gaffney now appears to have quit the reformed Sebadoh line-up as well). Left to their own devices, Lou Barlow and Jason Loewenstein welcomed Bob Fay into the fold, embraced a more accessible sound, applied some vague whiff of focus, and embarked on their brief flirtation with the mainstream. Bakesale is hardly, however, a so-polished-you-can-see-your-face-in-it rerecording of Rumours with Bob Rock twiddling at the knobs. The record still has warm fuzz and crackled distortion aplenty, with Jason and Lou using their delicate lyrics and frantic instrumentation to pour their precious little lo-fi hearts out. Who’d want to have any kind of relationship (platonic or otherwise) with either Barlow or Loewenstein? You’d be constantly walking on indie eggshells, fretting that if you put a foot wrong, they’d be straight down the basement recording an oversensitive, analytical soul-searching demo charting every aspect of your acquaintance thus far, describing in detail where you, or they, managed to completely, irredeemably mess thing up forever. With their joyous and admirable disregard for perfection, and their innate inability to achieve it, combined with their songwriters’ many continuous, quivering anxieties, Sebadoh’s music always remains in the moment, fails to become dated, and simply sounds more alive than most other acts ever had, would, or will. Bakesale might not be the most exciting Sebadoh album, but nor does it let anybody down.

What the original album faintly lacks in terms of eclecticism, spontaneity, and playful lo-fidelity experimentation, is more than compensated for by the bonus material, dug from the proverbial toilet of rarities. Here we get strange, short sonic experiments (‘MOR Backlash’, ‘Give the Drummer Some’), sparse, vulnerable acoustic demos (‘Not a Friend’, ‘Mystery Man’, ‘Perfect Way’ - complete with whistling solo), tuneless jams (‘Drumstick Jumble’), tuneful jams (‘Foreground’), and everything in between. ‘40203’ is a slow, instrumental meditation, which, perhaps surprisingly, wouldn’t sound out of place on one of Mogwai’s early EPs. ‘Fancy Ass’ is a hardcore Minutemen-style jazz-funk stomp. ‘Social Medicine’ is a catchy soft-rock ballad with the allure of social alcoholism as its muse. ‘Cementville’ is essentially Noise Music; whereas ‘Hank Williams’ is a paranoid/stoned nightmare which sounds exactly like the talking fridge from Requiem for a Dream decided to turn its back on the movie business and form a horrible psychedelic alt-country band. And who wouldn’t want to hear that?

In this current climate of reissue fever, Sebadoh seem to be consistently putting more care, attention, and enthusiasm into their efforts than most, with each re-release providing a plethora of extra material housed in attractive artwork, giving the appearance, at least, that there is more going on here than your average, cynical money-spinning exercise in easy nostalgia profit. As inconvenient as it may be, even if you already own this album it is well worth purchasing once again in its new form, if, of course, you can afford the ostentatious extravagance of buying the same Nineties lo-fi record twice within the same lifetime.