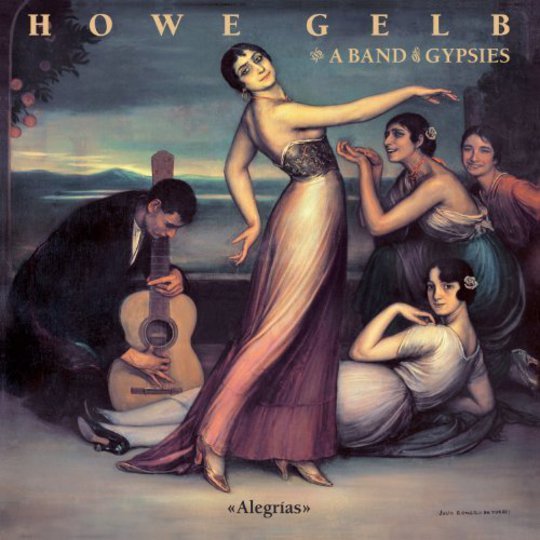 A lot can be made of Howe Gelb's collaboration with famous Spanish Flameco guitarist, Raimundo Amador. It might trouble some that Gelb decided to venture in this direction, forgoing his propensity for lo-fi Americana in favour of more, how shall we say it, musically clichéd pursuits. And there's no doubt that Alegrias is unafraid of what it is. There are plenty of hacking harmonic minor to major chord progressions and jaw-dropping arpeggios. Spanish guitar, played well, is right up there for its ability to totally stupefy. You can imagine Gelb sitting there with pretty much the same expression. A stew of vacant wonderment and wry envy.

Gelb's Band Of Gypsies provide the rhythmic claps and taps and sultry vocal support, and there isn't a lap-steel in tobacco-spitting distance. Recorded on a sun-laden Cordoba rooftop, the album's tone is almost uniformly sedate, save for very occasional bursts of hotheadedness. Lyrically, Gelb is also in a quieter, more thoughtful place. As ever, Gelb uses surrounding geography for inspiration, but there's nothing Stars-and-Stripes American about Alegrias. It almost feels like Gelb has crossed the El Paso border with little intention of returning. A Giant Sand purists' record, this is not.

But Giant Sand fans needn't all turn their back on Gelb's latest foray. In some ways, and quite predictably, Alegrias' slight movement away from the lo-fi roots rock sound of Giant Sand places Gelb closer to his other musical brethren, Calexico. While nowhere near as nourishing as an album like Feast Of Wire, Gelb has delved a little deeper into himself with Alegrias, employing flashes of Calexico's ghostly, semi-spiritual, semi-redemptive palette to colour his parochial storytelling. Gelb's dryness, both in terms of his lyricism and wit, still remains, however. And this may be this album's deal breaker. It takes time and perhaps a particular time of day and inclination to appreciate Alegrias fully. In the wrong setting, Alegrias' demands are too particular, too specific. In the right setting, Alegrias works like Gelb and his ensemble cast just turned up for your garden patio wedding afterparty.

Like any marriage that's got a chance of working, Alegrias is more than just the sum of its parts. As well as its stellar live production and mixing work (taken care of by John Parish), Alegrias' other trump card is its ability to produce more than just the same argument at varying pitches. Whether it's the marching Flamenco of '4 Door Maverick', the wisened, rambling country-blues of 'Notoriety' and 'The Hangin' Judge', the surprisingly soulful 'Blood Orange' and 'Broken Bird And The Ghost' or the playful Spanish folk-rock of 'Cowboy Boots On Cobble Stones', Alegrias never sips the same poison for any length of time, like a cocktail that doesn't care how it gets drunk. It should be noted that like anything meant to satisfy innumerable tastes, Alegrias is likely to impress and frustrate in equal measure. Name one consistent Howe Gelb record and you're doing well. But being as prolific as Gelb has been over the years, this isn't much of a unhappy trade-off.

Typically, Gelb appears to be saving the best 'til last. Final track, 'One Diner Town', probably the album's simplest track, is a pretty, melancholic tale of quiet love, loneliness and life in a Southwestern state bigger than most countries. "_I want someone to tell my sins to_", confesses Gelb, under his breath. If he ever does find that someone, it'd be a story I'd like to hear someday.