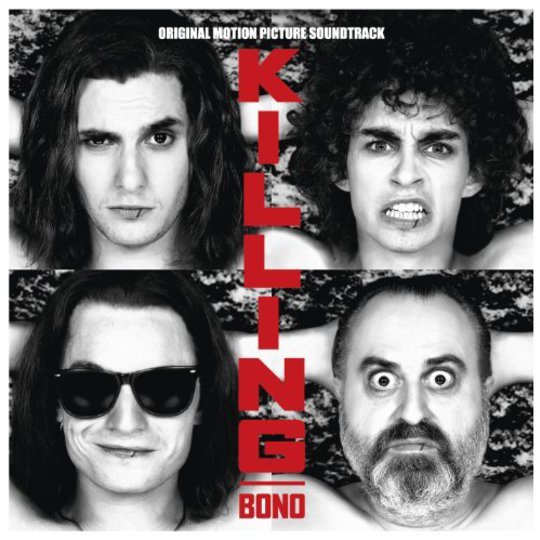 The problem with the Obligatory Soundtrack Album a project the size of Killing Bono inevitably generates is that film soundtracks, by definition, are not designed to be consumed in isolation. So, while the corporation gets a lump of product to flog for next to nothing, the chances of the Obligatory Soundtrack Album actually being a decent record in its own right are very low indeed. There are exceptions. There always are. Walter Carlos’ inspired patchwork of filched orchestral pieces, gnomic curios and mediaeval synthesizer music for Kubrick’s A Clockwork Orange and the downbeat song cycle Alan Price contributed to Lindsay Anderson’s O Lucky Man spring to mind. Even a rather less inspired cut’n’paste effort like Trainspotting - essentially an undemanding comp put together by your uncle who’s a little bit cool and a little bit naff – can work as audio-only simply by juxtaposing tried and tested pieces in a way that throws up a few mild surprises. And then there are musicals. But on the whole Obligatory Soundtrack Albums suck.

This one really sucks. I’ve listened to the thing three times, like Winnie the Pooh making sure the honey goes all the way to the bottom of the jar, and there is nothing short of hard cash or drugs that would make me repeat the experience. But what’s interesting about the Killing Bono soundtrack is that the extent to which it sucks is exactly the extent to which it’s a brilliant piece of work by (it says here) 'acclaimed up-and-coming Irish singer/songwriter' Joe Echo. The film is the autobiographical story of one Neil McCormick, who was a school friend of the man memorably referred to in a recent interview with former Clash tour manager Johnny Green as “the wretched Hewson”, and not unreasonably found himself scarred for life by the experience. While the wretched Hewson is busy going viral on an uncritical wave of platitudinous mullet-crowned bombast, McCormick’s own combo, called – ahem – Shook Up!, the exclamation mark being all their own idea, sinks without trace. So the job Echo has taken on here is writing a set of songs to represent the work of a bunch of Eighties Dublin also-rans in thrall to U2 who haven’t a chance in hell of making it (we can only assume that the likes of Hothouse Flowers and Zerra One were too busy with their pizza delivery rounds to accept the commission). And he rises to the occasion with aplomb.

That’s not just a cheap shot. Writing a song, at least in the initial stages where you’re selecting from a range of possibilities that’s to all intents and purposes infinite, is an act requiring a certain amount of commitment and self-belief. Writing a song that you know is trite shite, that is deliberately trite shite, must be very difficult indeed. Thinking about what you’ll do with the performance royalties probably helps. But still, hats off to Joe Echo.

Presuming for a moment that this isn’t the kind of thing he comes up with when left to his own devices, there’s some serious method acting going on here. It’s almost as if he’s dying for our sins. ‘Where We Want To Be’, for example, kicks off proceedings with a deadeye pastiche of the intro of U2’s ‘Gloria’, complete with all that ridiculous “whoa whoa whoa” business that the wretched Hewson defaults to and the regulation Edgy guitar delay flounce. It also contains the deathless couplet “All your life you’ve been running from dreams / From the blue and the red and the orange and green”, which is as succinct a distillation of the wretched Hewson’s pseudo-political, fake-older-brother fridge magnet claptrap as you’re likely to see outside the oeuvre of the great man himself. That said, number one pearl of wisdom on the album comes from the semi-fictitious Shook Up!’s cover of Eddie and the Hot Rods’ ‘Do Anything You Wanna Do’: “Don’t need no politician to tell me what I oughta be / Don’t need no optician to tell me what I oughta see”. Are you sure? Can you think of a word to rhyme with 'politician'? Quickly now. And what’s the letter at the end of the third row?