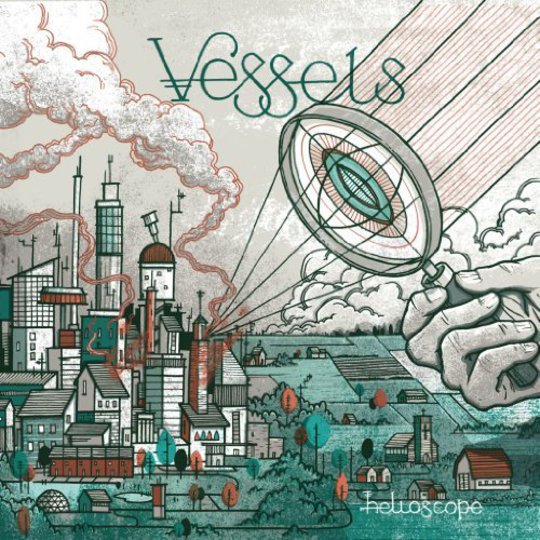 Even in 2011, it's pretty much a given that any band either proclaiming or inadvertently earning an a affiliation with the term 'post-rock', will instantly conjure an association with either Explosions In The Sky, or Mogwai. Ok, so it's maybe not always the case and perhaps not ONLY those two bands, but it's not far off. However, any band worth their salt that wishes to scale similar heights will almost always try to fly their own flag. Which is entirely the case with Leeds collective, Vessels, judging by their accomplished new album, Helioscope.

Funnily enough, both Helioscope and the band's first full-length album, 2008's White Fields and Open Devices were in fact recorded with frequent EITS collaborator John Congleton. Certainly with the latter, Congleton's knack for capturing and honing moments of pure cinematic beauty and instrumental delicacy was utilised to thrilling effect. On Helioscope, there is more focus on different instrumentation, bringing a lot of keys and electronic textures to the fold in between familiar chiming guitars and epic, cascading rhythms.

'Monoform', which begins suspiciously like 'Balloons' by Foals before spiralling into its own world entirely, is headed up by chunky distorted synth, egging on the opening skittering pace and fluttering and oscillating throughout. It soon morphs into pulsating waves of grandiose and uncompromisingly atmospheric sonic layers, with the latter minutes of this six-minute epic pinning down the dual feelings of mountain-top desolation - a sensation evoked frequently by White Fields - and the stunning, often destructive power of nature.

'The Trap' then veers into more experimental rhythmic territory, whilst no less engaging or alluring while 'Recur' probably sits the closest to the band's previous material and is arguably the most straight-forward moment. Yet this is hardly a fault, as even the most familiar and expected material on offer is handled with confidence and maturity; key signs again that the band are coming into their own.

'Meatman, Piano Tuner, Prostitute' features vocalist Stuart Warwick (formerly of the band Jacob's Stories) and begins with delicate, understated keys, unfolding at a self-proclaimed "snail's pace" and slowly but surely picking up in terms of volume and drama, with Warwick conjuring a reflective Thom Yorke. 'Art/Choke', on the other hand, is an immediate juxtaposition, opening in strikingly heavy fashion, underpinned by the consistent clatter of drums and hypnotic piano figures that eventually morph into fuzzed-out synth drones, again showcasing their impressive knack for dynamics.

'All Our Ends' is easily the most upbeat and cheerful of these nine pieces. Resting on interwoven guitar melodies, it's charming and summery, clicking into a brisk, slick rhythm before doling out gargantuan slabs of cathartic distortion-ridden carnage. Ending on the subdued piano balladry of 'Spun Infinite', Helioscope is another example of Vessels' growing ability to map out enormously ambitious journeys that go beyond the obvious touchstones and influences. In short: definitely worthy of your attention.