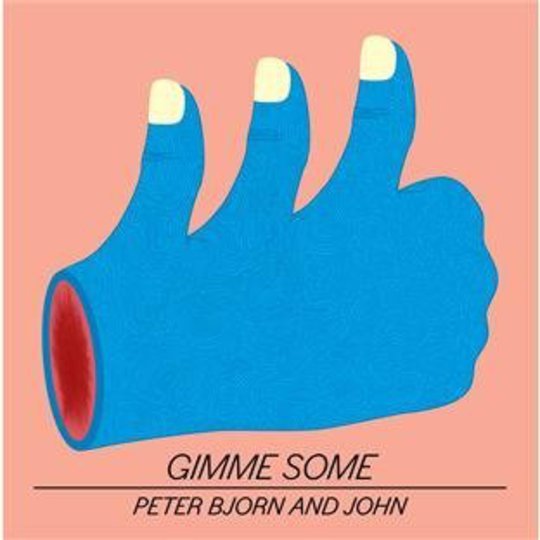 When the Swedish threesome Peter Bjorn & John released Writer’s Block (2006), the band looked like world beaters. The album captured everything that was good in new millennium indie rock and wrapped it up into a neat little package including the unforgettable, if ubiquitous, single ‘Young Folks’. Who could forget that virtuoso whistling? After touring worldwide on the strength of the album, spreading the gospel of Scandinavian pop, the band earned a tidy following of fans eager for an encore to the perfectly poppy Writer’s Block. What they received instead was Seaside Rock (2008), a somewhat tiresome experimental record that the band had the good sense to keep to a limited release. If Peter, Bjorn & John had intended the album to scare off mainstream fans that expected a record full of ‘Young Folks’: mission accomplished.

Since then the world has been waiting for a return to form. Latest album Gimme Some may be the record where we all remember why we fell in love with Peter Bjorn & John in first place.

In 11 songs Gimme Some goes straight for the pop jugular. Bright production mixes with catchy chord progressions, held together by lyrics waxing on the usual smorgasbord of youthful dilemmas. Chief among the subject matters is love: the philosopher’s stone of popular music lyrics. Against the backdrop of a relentlessly over-sexualized media culture, old-fashioned love can be about as compelling as a ham sandwich. But in the right hands, namely, Peter Bjorn & John’s, human relationships are drawn in full color with none of the over-saturated folderol of teen drama and reality show hysterics. Other bands these days go in for that old-school emotional authenticity – think Girls or the Fresh & Onlys – but Peter Bjorn & John have the special gift of capturing the mid-twentieth century heartfelt pop naiveté without the vintage indie smirk.

Maybe it’s just the dreamy vocals, but every song sounds like a come-on. ‘Down Like Me’ begins: “I have been inside your warzone/and I’ve seen you drop your poison/You compromise and steal, telling people how you feel/Though it’s not a bit for real, but the dollar gets you wheels…” More or less the usual youthful statement against the death-dealing materialism of war-mongering American imperialism, delivered in the key of European disaffection – but when the breathy lyrical lilt mixes with that signature syrupy reverb, it’s hard not to read heartbreak into the politics. The songs on Gimme Some reward the second look, which is always the secret to fashioning the perfect pop song: hide depth in simplicity. Apart from the lighter numbers, the Hives-esque ‘Breaker Breaker’ and ‘Black Book’ are loud, hi-speed burners that make for good palate cleansers.

Peter Bjorn & John have come a long way since forming in 1999. Finding that first hit is always the horizon for a young, undiscovered band. Who can fathom what happens in that impossible beyond where people you’ve never met actually care about your music? The band found out with ‘Young Folks’ and promptly withdrew into their creative shells faster than a hermit crab on Seaside Rock. Would they ever write a straight pop song again? Gimme Some delivers more than a few pop songs, a legitimate pop album written with the subtlety of a band that has come to appreciate, instead of run from, their hit-making ability. The second track title ‘Dig A Little Deeper’ might well be the motto for the entire album. For every catchy hook there’s another story beneath the surface that you can investigate at your leisure, or pleasure, or just plain ignore. No matter what choice you make, over a decade into their career, Peter Bjorn & John are sitting pretty.