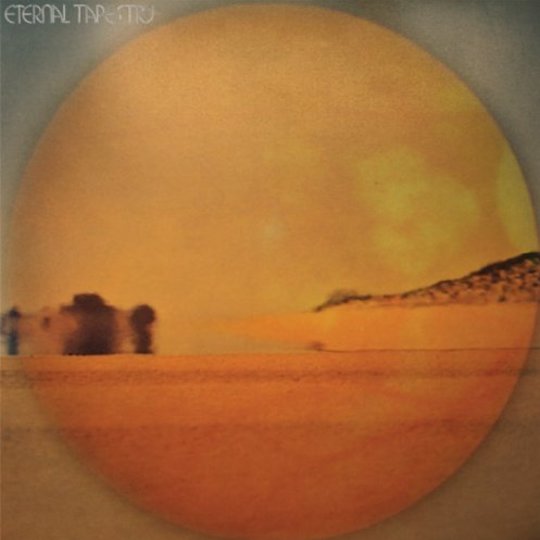 If Eternal Tapestry were the kind of violent thugs who flogs stolen toasters in dodgy pubs, they might well have something like 'psychedelic as fuck' or 'instrumental 4 eva' tattooed across one of their forearms. As it is, a name like Eternal Tapestry implies much less testosterone-fuelled considerations; "A much softer fist, a much weaker wrist" as Kurt Wagner) once said. If not the violent larceny, then at least the steely regard for trippiness symbolised by our fictional tattoos is there, however.

Beyond The 4th Door is the first album ET have released on Thrill Jockey, and a quick glance down the track listing will (finally) reveal where this tortuous metaphor is going: 'Ancient Echoes', 'Cosmic Manhunt', 'Galactic Derelict', 'Reflections In A Mirage' and 'Time Winds Through A Glass, Clearly' - this record couldn't actually be any more psychedelic if it had a picture of a stoned wizard on the front cover.

The music contained in those five tracks is a kind of darkly ambient series of guitar riffs, the weight of which is quite incredible for a selection of songs which never really seek to propel themselves towards a peak, or use quiet/loud-style tension building devices. What ET do instead, and it has to be said they do it very well, is lay down slab after slab of riffs so heavy it's almost surprising that drums, tenor sax and synth escape from their gravitational pull to make themselves heard. If you can imagine the extended build-up of Tool crossed with the spaced out nature of Secret Machines (before they turned shit) you'll have something like an approximation of ET's vibe.

Slow and heavy wins the race though, and to say Beyond The 4th Door never tries to peak only means that when it does it won't be on anyone else's terms. There is an almost spiritual discipline to the way that this record blends the conventions of krautrock with ambient to create narratives that use repetitive patterns to create momentum, yet frames the progression in a constant languid haze. Even when the guitars start to scream on 'Galactic Derelict' and 'Time Winds Through A Glass, Clearly', they only do so in an understated groove which recalls Sleepy Sun at their most laconic.

A lot of the press surrounding ET has mentioned them in the same breath as Spacemen 3 and Loop, but on Beyond The 4th Door there is a kind or widescreen polish to the tracks which sounds to these ears decidedly more influenced by progressive rock from America than Britain. If your heart does start to beat a bit faster when reading the names of Loop and Spacemen 3 it’s a pretty safe bet you will love this record. That's the kicker though. If you are the kind of person who doesn't like long, drawn-out psych jams, a) what's wrong with you? and b) you almost certainly won't have the patience to get why this album is worth the attention it demands from the listener. The era of setting aside an hour or so to sit and listen to an album is anathema to some in the age of mp3s and YouTube distribution models, but that’s exactly what you need to do for Beyond The 4th Door. It's for that reason that this one goes down as a (very slightly) qualified success.