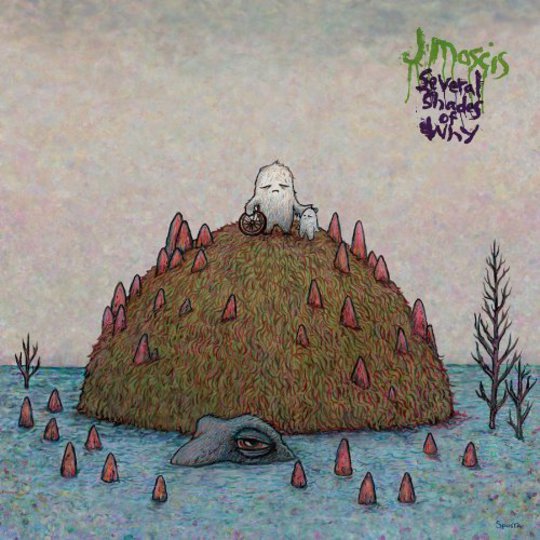 J. Mascis is one of the few guitarists on the planet who can play solo after extended solo without it sounding like a pointless exercise in masturbatory showmanship. This might be something to do with the fact that he appears unable to communicate effectively through the usual means of speech. It’s as if he’s bottling everything up, until he’s finally able to unleash his feelings by firing off multiple shards of glorious guitar noise. This may be tenuous, but is there a correlation between certain players’ inarticulacy, and their ability to play genuinely soulful guitar? Keith Richards sometimes tries to speak, but the results are rarely a success - bizarre, slurring rambles at best. Fairport Convention’s Richard Thompson had less of a choice; having suffered from a pronounced stutter since childhood, guitar provided him with a outlet. David Gilmour of Pink Floyd, on the other hand, speaks fairly eloquently, and yet his guitar solos rarely seem to be saying very much apart from 'Look at me! Look at what I can do!'

The number of solos on Mascis’s largely acoustic new record are minimal. The first one doesn’t appear until track five, and even then it is tantalizingly brief. The closing track, 'What Happened', has the tenacity to fade out just as the solo seems to get going. Far from being frustrating, these fleeting glimpses only serve to highlight Mascis’s sensible restraint in resisting the urge to sprinkle everything else with finger-fireworks, the lack of which allows his underappreciated skill in the art of songwriting to shine through. When it does rear its head, the solo stimulates the realization that its absence had thus far gone unnoticed, because the listener’s brain and been distracted by the sheer quality of the tunes.

Whilst bandmate Lou Barlow’s other projects have employed their own lo-fi aesthetics, distinguishing them from the output of Dinosaur Jr, Several Shades of Why certainly looks like a Dinosaur Jr album, with its cartoon artwork by Marq Spusta. And on first listen, it also sounds deceptively like Jr stripped bare. Mascis, whether electric or acoustic, has a distinct style, with his instantly recognizable lethargic drawl-voice. Like later Dinosaur records, the song titles tend to be either questions without punctuation ('Is It Done', 'Where Are You', 'Can I', 'What Happened'), last-ditch, belated statements of intent ('Listen To Me', 'Make It Right'), or declarations of matters gone astray ('Not Enough', 'Too Deep'), with the lyrics following similar trends.

So initially the listener might be duped into thinking they’re spinning a best-of Dinosaur Jr’s mellow moments; those numbers when they choose to bring it down a little, mid-album, after a few blistering-yet-catchy heavy chuggers. And all the songs here are good enough to have appeared on a proper Dinosaur album. In fact, many are better than those which were included on their last LP, 2009’s Farm, which seemed a little underwhelming after their rousing reunion album, Beyond.

It’s only on further spins that the subtle but crucial contributions of J.’s collaborators become clear. Kurt Vile, GY!BE’s Sophie Trudeau, Broken Social Scene’s Kevin Drew, Band of Horses’ Ben Bridwell (or 'Ben… erm' as he is referred to by Mascis in a recent online interview), Matt Valentine, original Mercury Rev flutist Suzanne Thorpe, and more, all enrich the music with texture, but never distract attention away from the songs. Mascis, too, adds numerous nifty little touches with his playing, all of which make repeated listens rewarding.

For a principally acoustic record, there is much variation. The dark sparseness of 'Very Nervous and Love' recalls 1993’s 'Not The Same', elsewhere we get the almost jaunty folk of 'Not Enough', and 'Too Deep' is something of a late-night lullaby. 'Make It Right', meanwhile, is 'Here Comes The Sun' if George Harrison had written it in bed, asleep, having bought and consumed every item in his local branch of Boots with the words 'may cause drowsiness' displayed proudly on the label.

This record is a welcome addition to the long-haired monosyllabic troubadour’s more than impressive back catalogue.