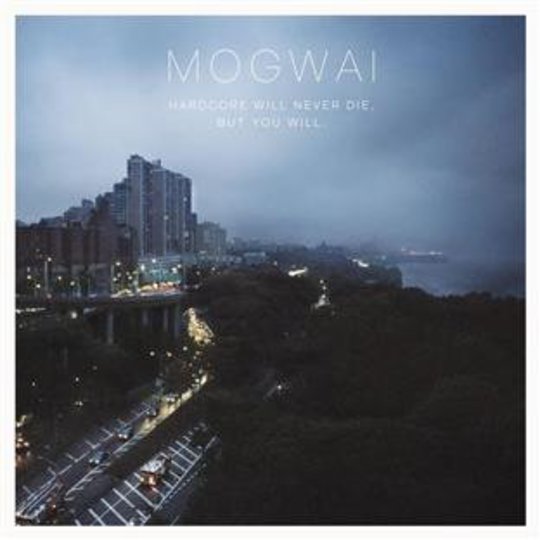 It seems that Mogwai can’t help but sound hopeful, these days. There’s always been a plaintive, skyward reaching quality to the (predominantly) instrumental Glaswegians's best moments, when their instruments seem to suddenly break free of their flesh and blood shackles and soar towards the heavens, but it’s become ever more pronounced throughout their career. Witness the dawn-breaking strains of 'Autorock' and the warm piano that opens 'I’m Jim Morrison, I’m Dead', the first tracks on their last two albums. Rather than getting cynical with age - as might have been expected from an act with a history of brutally honest put downs, wry injokes and downright crude t-shirts - they sound increasingly like a band who get a real kick out of writing songs and performing them live, as those who saw them on their last and arguably finest tour will concur.

So, even when it takes the clanging, chiming and chirruping ‘White Noise’ a full two minutes to break cover and swoon into breathy washes of sound, I’m not surprised to feel a familiar grin creeping across my face. Just when the nature documentary producers nationwide were tearing out their hair, having dialled up 'Hoppipolla' one too many times, Mogwai have obliging gifted them a new soundtrack for shots of baby birds taking to flight. But the smooth trajectory plotted between Mogwai’s previous efforts and their latest - and possibly best-titled album - do pretty much end there.

Of late, a new Mogwai record has been generally greeted in a manner not unlike the arrival of a new jumper at Christmas: an initially underwhelming, eminently serviceable offering that before you know it becomes an indispensable wardrobe item. Over time, one becomes more and more attached to a Mogwai album: it reveals manifold precise subtleties and clever touches unheralded by initial reviews keen to suggest that it’s just another jumper… like the one you got last year. Those reviewers don’t know just how well that jumper fits and how surprisingly stylish it can be.

For better or for worse, that particular buck stops here. Because Hardcore Will Never Die, But You Will (Amen, brother), is perhaps the biggest tangent the band have taken since the synthy glitch of Happy Songs For Happy People. Initially, it’s hard to say exactly why that might be. All the key elements of the Mogwai sound remain: molten crescendos intertwine with humming diminuendos, whilst muscular rock music collides with classical dynamics and eerie lyricless balladry.

And then after a while, the hanging chord drops: rarely have Mogwai displayed such diversity on record. At times, you could be forgiven for thinking that Braithwaite and co. are taking you through their record collection, mixtape style. There’s the unmistakeably Don Cab/Battles chiming of ‘White Noise’, the unashamedly scrawling late-nineties post hardcore of 'San Pedro', giddying in how it channels forgotten greats like Unwound and Chavez, the shimmeringly Neu!-esque “How To Be A Werewolf “and the translucent Tortoise homage of 'Too Raging To Cheers'. The only thing that’s missing, when you take into account the Dylan Carlson gothic slo-mo of closing track 'You’re Lionel Richie', is a genuine Wu banger.

The fact that band have always been very open about their enthusiasm for their influences and their admiration for a wide variety of source material doesn’t do much to counter the accusations of Emperor’s New Clothes or incoherence that will doubtless be thrown about. They’re easy criticisms, but impersonal at best: it’s part of Mogwai’s charm that the people making the music you’re listening display an interest in and an obsession with music that maybe even dwarfs your own.

The real problems actually come for those praising this album. As suggested above, trying to describe Hardcore Will Never Die, But You Will in any kind of concrete manner, is a non-starter. That it’s quintessentially a Mogwai album and could only really be a Mogwai album, yet at the same time is different in the way that it openly sounds like a lot of other bands, which is what we’ve established so far, is little help to the more discerning reader. Much has been made of the increased utilisation of electronics, and there’s little doubt that this is much less of a guitar-orientated set. However, the pummelling electrorock of 'Mexican Grand Prix' is (like much of the album) an oddity. Mogwai have created a record of outliers: this is no more their electronic album than it is their tribute to Nineties slacker rock, or their vocal album, or their krautrock album. That such a diverse array of tracks are executed with such precision is worthy of praise alone.

Nonetheless, the album’s best and most immediate moments, like much of Mogwai’s work of late, do come at it’s most muscular. 'San Pedro' is a thrillingly blunt riff delivered with all the aplomb of a 'Glasgow Mega Snake' or 'Batcat' and (whisper it) probably a stronger track than either of those two. Similarly, 'Rano Pano' marries a crushing guitar to spiralling church organ synths to rather excellent effect, and closing track 'You’re Lionel Richie' builds from throbbing static into cathedral sized riffage.

But there are other, hidden depths buried in this album. The mournful piano ballad 'Letters to the Metro' might not set any reviewers on fire on first listen, but who would have picked out 'Friend of the Night' from Mr. Beast as a future crowd favourite? Similarly ‘How To Be A Werewolf’ is not only an intriguing experiment with motorik, but an able demonstration that even without lyrics, Mogwai can still write melodies worth humming along to.

The point most worth stressing at the end of this review is that it’s always dangerous to write off a Mogwai album based on first listens. On commencing to put metaphorical pen to metaphorical paper, I doubted as to whether I could form an opinion on a record which feels so sprawling and unconnected when compared to the seamless flow of ideas on earlier records. Yet it’s these jarring changes of pace, tempo, tone and style that actually grow to form the record’s own, unique identity. Whether this is a better record than previous Mogwai releases is hard to say categorically, but it is certainly bolder and braver than what came before it. Yet equally, it is the same trademark moves and subtleties that will make and just as rewarding of repeated listens as its predecessors. Mogwai have released another jumper, but not quite like we know it.