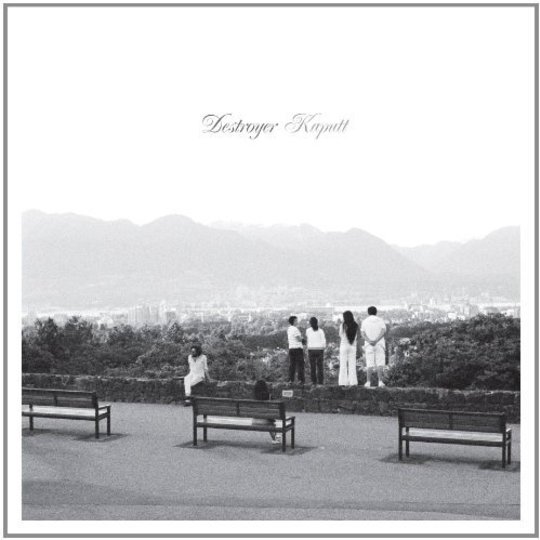 Daniel Bejar has been indie rock’s best kept secret for over a decade, but that should change with his latest release, Kaputt. From his humble beginning as a troubadour in the mid-Nineties, recording solo on a 4-track, the Canadian singer-songwriter hasn’t strayed too far off that path, despite his propensity to mix and match elements of surprisingly disparate genres. Since his fourth album, 2000’s Thief, he has meshed folk with glam, blue-eyed soul with new wave, and more recently, ambient electronic with disco. Indeed, the only sound he’s steadfastly avoided is U2 stadium rock. No matter the variety of styles, the multiple layers of instrumentation and the revolving cast of musicians, Destroyer remains at its core a shabby, tousled-haired poet with an acoustic guitar slung over his shoulder.

On his tenth album under the Destroyer banner (Bejar is a semi-regular member of the New Pornographers, records with Carey Mercer and Spencer Krug as Swan Lake, amongst other accomplished side projects), he approaches near perfection by combining complex song structures with simple pop melodies. He cites Roxy Music and jazz-pianist Gil Evans as the principal catalysts for his latest batch of songs, which fuse funk basslines with brooding keyboards, delicate guitars and smooth-jazz horns. Soft rock is an unexpected choice for the album’s distinguishing characteristic, but he carries it off thanks to inventive flourishes that are nothing short of thrilling.

The songs resemble the individual scenes of an intricate, psychological drama. Opener ‘Chinatown’, which Bejar wrote about a neighboring community, could easily be referencing Roman Polanski’s classic. In the movie, Chinatown is the seamy underbelly of Los Angeles, where private eye J.J. Gittes is simultaneously disgusted and enthralled by what he sees. ("Forget it Jake, it’s Chinatown.") In the song, the wistful lounge music evokes the same dangerous, neo-noir atmosphere. Bejar’s stroke of genius comes with the introduction of fellow Vancouver native Sibel Thrasher. On the chorus they come together: “I can’t walk away, you can’t walk away”, with a tender understated intensity.

Longtime Destroyer producers David Carswell and John Collins expertly manage Thrasher’s contribution to the album. Her powerful voice is often reminiscent of the late, great Minnie Riperton, though her presence never overwhelms. She is mostly used as an orchestral element, offering subtle backing vocals, but there are moments when her vocals really make an impact. In the second half of ‘Suicide Demo for Kara Walker’, Thrasher’s voice is a sublime complement to the slow-burning piano and woodwinds, before finally ceding to a magnificent horn section for the finale. Her talents are particularly evident on the reworked, slimmed-down version of ‘Bay Of Pigs’, the 13-minute title track of the 2009 EP. The playful duet between Bejar and Thrasher that closes out the final minute of the song makes this mix infinitely superior to the original.

For his part, Bejar wisely chooses to play it straight for his vocal performance, eschewing the unorthodox tics that have occasionally been a distraction in the past. As it turns out, he doesn’t have to rely on surreal lyrics for a beautiful song. Sure, he’s still got that nasally croon, but his mellow, monochromatic delivery works well with the laid-back vibe of these songs. Although Kaputt may well be the first Destroyer album on which Bejar’s poetry is not its foremost attribute, it’s his ability to spit out brilliant couplets, combining common expressions with uncommon ones, that has attracted a rabid cult following, and this album contains some of his best wordplay to date.

On the sprawling ‘Bay of Pigs’, he begins by confessing, “Listen, I’ve been drinking, as a house lies in ruin / I don’t know what I’m doing / Alone in the dark, at the park or at the pier, watching ships disappear in the rain”, then goes on to reference a character from another song (Christine from ‘Painter in Your Pocket’), throwing up in an English garden and a dozen other scenarios unrelated to the bungled 1961 Cuban invasion. Bejar is not usually given credit for his technical prowess, but there’s no mistaking the skill in the spellbinding ambient opening, the provocative early New Order synths, the acoustic guitars used in transition, the invigorating dance groove that kicks in around the seven-minute mark, and the final, joyful refrain: “Free and easy, gentle, gentle / The wind through the trees makes you mental, for me” that strangely manifests into a sing-along moment.

Despite the album’s gentle tendencies, Bejar can’t resist skewering some of his favourite targets, such as the commercialism of the music business. On ‘Savage Night at the Opera’, he sings disparagingly, “You sound familiar with your scene”, then adds, “I heard your record, it’s all right”, which comes across somewhat more conciliatory than snide thanks to a jaunty beat. But for the most part, he directs his attention to a desperate search for love, in which his protagonists have an excessive amount of wine flowing through their veins, and all parties involved seem willing to take a chance. On the title track, he sings, “Wasting your days chasing some girls all right / Chasing cocaine to the back rooms of the world all night”, and in contrast to the mournful saxophones and trumpets, adds, “Oh, sounds like a dream to me”. Bejar’s reckless approach to romance is almost certainly one of those things you’d live to regret, but that’s the appeal of great artistic endeavours: when the writer can pull in his audience so completely that we experience all the adventure while risking none of the consequences.