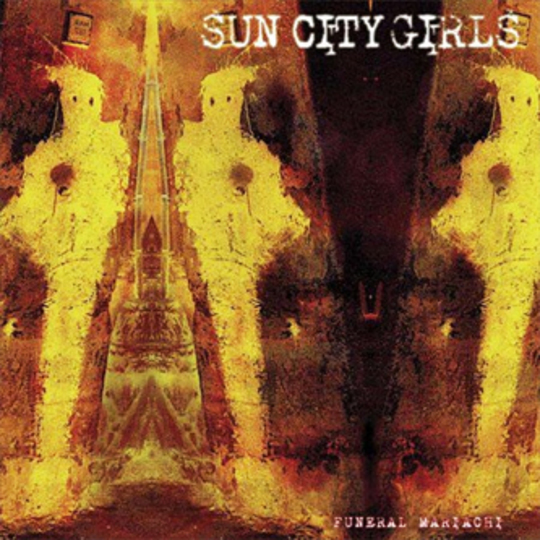 The last ever album by Sun City Girls has a darkly comedic title if you don’t know the circumstances behind it. Should you already be up to speed, Funeral Mariachi is… darkly comedic, but with a caveat. It’s not unknown for bands to alter names or titles which betray a loosely flippant attitude towards death once they have to deal with its sudden consequences – perhaps you can think of some examples. However, the attitude adopted by Sun City Girls, or surviving two members Richard and Alan Bishop, is that when they laid drummer Charles Gocher to rest in 2007 after his lengthy struggle with cancer, they did likewise with the band. Finally, then, this remarkable and venerable Arizona trio’s final flourish, over three and a half years after Gocher’s passing – his percussion parts assembled into 11 tracks which do not qualify as mariachi, but neither as funereal. No idle anthropomorphism about this particular wake.

Funeral Mariachi’s 37 minutes could be taken as sedate, insomuch as matters never become noisy or freeform enough to scare any but the most conservative listener. Certainly, that's a side of SCG explored on some of their sides – not just in their earliest incarnation as pranksters amidst their state’s notably goofy early-Eighties punk scene, but throughout their impossibly dense, often scarce catalogue. The closest this album gets is ‘Ben’s Radio’, the opening track: a kind of pseudo-dial-turning collage of all manner of differently-pitched and disembodied voices. (A rasp of “Rangda, Rangda!” – the demonic Balinese myth character who Richard Bishop’s newest, wonderful band is named after – may jump out at you.)

Otherwise, compositions are global-minded, as SCG fans will expect – Alan Bishop is also renowned for bringing unheard music and field recordings to the West via his Sublime Frequencies label. Ideas, in the main, are unified rather than subverted. ‘The Imam’, which follows ‘Ben’s Radio’, is essentially an effort to marry Middle Eastern folk to old time bluegrass, and bridge-buildingly captivating. ‘Black Orchid’ is a screwy take on the Indonesian soundtrack-pop wail; the title track, which also bids us farewell, pits low-lit jazz trumpets against Gocher’s dancing drums and guitar which twangs with the purpose of Richard Bishop’s recent, marvellous solo album The Freak Of Araby.

Songs that operate more obviously in the rock idioms come up equally rosy. ‘This Is My Name’ is essentially in the Velvet Underground mould, albeit powered by what sound like hand drums and Alan’s gooey Mellotron, plus a deep and sombre vocal. Although Ennio Morricone looms large over ‘Blue West’ (in addition to SCG actually covering his ‘Come Maddalena’ piece), it’s enacted in a rockistly rustic fashion that you could imagine Califone or Calexico turning in. We even get, in ‘Holy Ground’, what might be a legitimate love ballad, delivered via hyperbole or not (“Lady of the shining flame, my altar burns in glory of your mighty name”). There are two piano-led pieces that, you wonder, might have been composed with incidental soundtrack music in mind – the last SCG release prior to this was their score for Harmony Korine’s Mister Lonely, which they split with Jason Pierce.

Pondering what exactly Funeral Mariachi might be for is a surefire fool’s game. It could ease an inquisitive listener into the rockier terrain of their catalogue, but most of it is out of print. It could serve to let you know that the Bishop brothers are still active under other monikers – Richard played at ATP with Rangda last weekend, as I write, and Alan probably appears on Master Musicians Of Bukkake’s recent Latitudes EP. It doesn’t have to be anything more than the two things it certainly is: a tribute to a longtime bandmate and friend, one in which he gets to take part in spite of departing the planet, and a collection of songs which at different points are clever, funny, fulsome and moving.