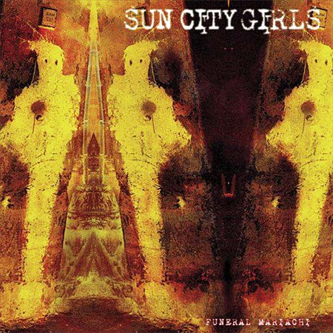 A tribute to a longtime bandmate and friend, one in which he gets to take part in spite of departing the planet, and a collection of songs which at different points are clever, funny, fulsome and moving.»

'funeral mariachi' is sun city girls' final record before the untimely death of charles gocher in 2007 and it's a stunning, melodic beauty. one of modern music's most mysterious and unpredictable ensembles, for their final record they delivered an accessible gem in the form of this epitaph. from the delirious intro of "ben's radio" to the final drum crash of the title track, funeral mariachi delivers 11 well-crafted gems which display the refined studio production side of scg shrouded in that otherworldly glow which has always separated the group from their contemporaries. beyond the gorgeous folk and vocal styles which drive the album, there is a heavy retro italian cinema influence, arabic and indonesian references, and a ghostly psychedelic moodiness throughout. post-production and final mastering was completed by the bishop brothers after the untimely death of charles gocher in 2007 and the results will not disappoint followers of this impossible-to-describe unit. funeral mariachi provides a perfect introduction to the more melodic sector of the scg universe surfacing, ironically, at the end of their career in the form of what someday should become one of the most beloved records they ever created.
description from www.roughtrade.com