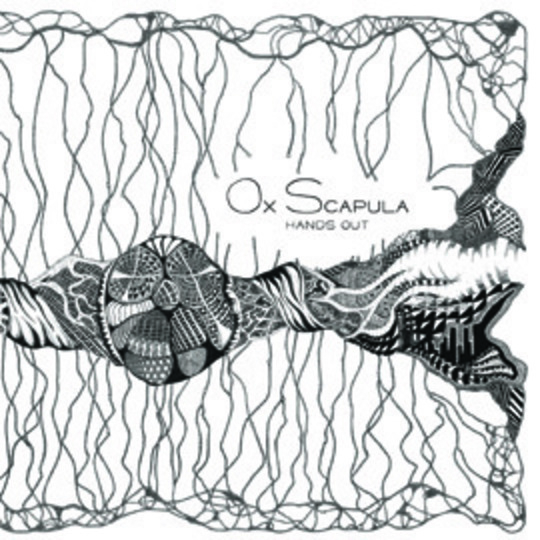 The majority of us now would unabashedly admit life would be impossible without the internet - it’s the most valuable tool we’ve ever had when it comes to accessing, consuming and discovering music. But for the purposes of researching this review, it was surprisingly and woefully unequipped for the task of educating the outsider as to the leading lights of the Stoke-on-Trent scene. Save for some sparsely-informed official avenues and a few punter-filmed videos of low-key performances on YouTube, there’s precious little out there about Ox Scapula on a personal or musical level.

Yet, noises were being made about the quartet’s angular, thundering punk back in 2008, augmenting with every wrangled performance and ramshackle release. Hands Out is their debut, very much a collective project released by labels Gringo, Sea Owl, Welikedanger and Art For Blind, and follows on the heels of the band’s LAX USA Cop tape EP and a 7-inch inch split with Sheffield’s Wooderson.

Vocalist and guitarist Mark Deaville recently told DiS that they’d recorded the album in order to document songs they’d been playing since the band’s inception. And as a result it’s unsurprising that despite it being their first official ‘album’, Hands Out almost feels like a story-so-far-compilation. Two of the eight tracks here, ‘Suspended Letter’ and Divorce’, have appeared on previous releases.

The album continues in the same vein as that older material; rank with wiry dissonance and taut, heaving math riffs. Due to the fractured, often crushing nature of Hands Out, Hoover and My Disco are probably its closest sonic acquaintances; of course though, by naming themselves after an early Polvo song the band have always worn their influences - arguably their blueprint - on their sleeves. Unpredictability is what lies, like a sleeping menace, at the thumping heart of this record.

Each song sounds like a myriad tracks haphazardly stitched together. See ‘Taking Liberties’ and ‘Half Circle’; the former jarring with uneasy time signatures, guitars crashing into one another before affixing in a one-note, ringing cacophony for over half a minute, the latter a down-tuned and down-mouthed slab of brawn.

Similarly the bleak and bruised ‘Constant’ slugs it out, with either Deaville or dual vocalist and guitarist Carl Fedarb - it’s hard to tell - proffering a jagged, muffle mouthed delivery that stabs and bleeds in and out of consciousness.

However despite their difficult sensibilities, these tunes burrow their way into the cranium and remain lodged there like some sort of stubborn tumour. Opener ‘II’ particularly showcases the groove that glues each of the Ox’s awkward, contortionistic shards together, the undertow that guides Hands Out’s more melodic moments. And punctuated by urgent yelps “would you do it again!”, at times the song finds itself shimmying into an almost Nirvana-esque number.

There’s times however that things stray from the visceral. Metallic instrumental ‘D.T’ with its Black Angels-like, methodical wring initially packs a punch, but its repetitive, slogging nature starts to sag, ensuring it lacks the sharp potency so present on other tracks.

Truth be told there’s been little in the way of sonic alteration for Ox Scapula over the years – for instance the stroppy guitars and chugging riff of ‘Cuts’, now almost two years old, would sit comfortably with any and all of the songs in this collection. And in this writer’s humble opinion, it'd eclipse ‘Dead Letter’, chosen for inclusion from an earlier release. Really, it deserves to be on here. But when a band is this tight from the get-go you could argue that there’s little room for bolt tightening. In their own words, the band describe their sound as ‘loud, klangy, horrible, awkward, punk’ - Hands Out easily fulfils this agenda, there’s not much more you could expect or ask from it.