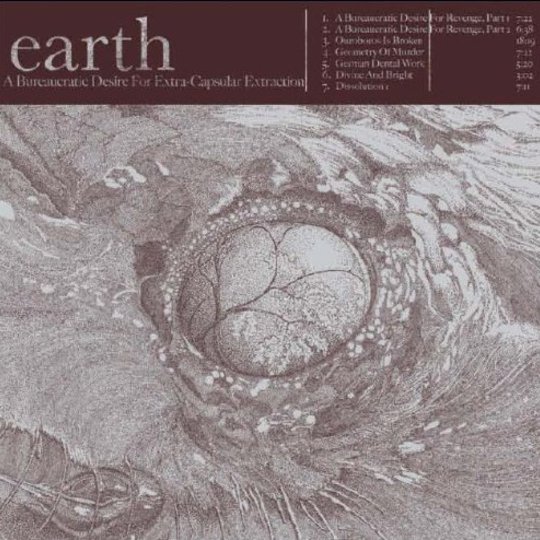 It’s hard to sell Earth to anyone who doesn’t already get Earth. Dylan Carlson (and friends) create the kind of music that’s best prefaced by an introduction from a wide-eyed friend who claims it’ll turn your world upside down, and a few confused listens before reaching an epiphany of your own. Herein lies the problem in reviewing a re-issue of a band who didn’t just define the niche in which they’ve nested but actually created it, from the dials of a Sunn amp to the bruised strings of thrumming guitars. To bring out the intangibility of their sound, to excavate and emphasise just why they mean so much without alienating casual readers with cackhanded cliché, is difficult to achieve with any degree of objectivity. It goes without saying therefore, that objectivity is out of the window from here on in, for better or for worse.

Ever since I picked up a copy of Earth 2, I’ve had a near religious love for everything sullied by Carlson’s hands. Earth’s vision of extreme music, despite their legions of admiring imitators, remains completely unique in the way it carves such bizarre beauty out of monolithic, monotone bleakness. They are at once metal, and not really metal at all. Their sound is heavy, but the intense humming that swarms over all their pre-reunion records is feather light, and head rush inducing. The standout on this impressively crisp sounding re-issue, ‘Ouroboros is Broken’, throbs with menacing gongs and low headed pitch black guitars, yet somehow manages to retain something that can only be described as melancholy, the swarm of buzzing feedback lifting slablike riffs to vertigo-inducing heights. Where followers such as Sunn O))) are cold, icy even, Earth’s sound is somehow warm and rich in colourful tone.

It’s tempting to pin such accolades on Carlson and refer to his narcotic past: there’s no denying that whatever he was clawing for all those years ago musically was influenced by the uppers and downers coursing usually simultaneously through his veins. But there’s more to it than that, and it’s more than drugs that fuelled the perfection of a guitar tone that’s unlike anything else quite achieved. Granted, that heavy/light feel would reach its height for Earth 2, but it’s present here too: the crunching density of the opening ‘Bureacratic Desire for Revenge’ couplet, trudging ever onwards, is as powerful as most of Earth 2 in all except sheer endurance.

The elements found here even signpost Earth’s latest turn towards something more cinematic and swallowable. Discounting that overwhelming feel of size that characterises Earth’s records, ‘Geometry of Murder’ is as close as Carlson comes to a breakneck rock song, midtempo percussion careering over blues laden guitars that strangely bring to mind the whiskey soaked codas of The Bees Made Honey… and Thin Lizzy all at once. Even in their most primordial phase, Earth might have even sounded more adventurous than later releases, and whilst it’s the more recognisable first half of the record (made up of Extra Capsular Extraction) which is the brightest, the early experimentations that form the latter half are enthralling. The rawness is not lost despite an incredibly capable re-master which ekes and boosts every hum, throb and hiss from the original tapes, making this a package well worth owning for those lucky enough to already have the originals in their hands. ‘Divine and Bright’ is an atypically grungy midtempo ballad, as expected from a track featuring that famous Nirvana member on bleary eyed vocal. But even Kurt is outshone by a pulsingly industrial remastered ‘German Dental Work’, martial drum machine and that trademark ebb and throb of bass creating something that brings to mind Big Black and Black Sabbath.

It’s pretty unlikely that anyone who doesn’t already hold Earth’s glacial moves in high regard is going to pick up an album which consists of the band’s first two EPs for Sub Pop, re-mastered and shoved end to end on a compact disc or double vinyl. Yet still, it’s worth attempting to do more than preach to the converted, because this collection is full of the intangibly sorrowful, deeply soulful haze of feedback and label baiting extremity that has always set them far apart. A Bureaucratic Desire For Extra-Capsular Extraction is yet more proof that Earth were, and indeed still are, vitally different to so much of what’s come before them, after them and even surrounded them.