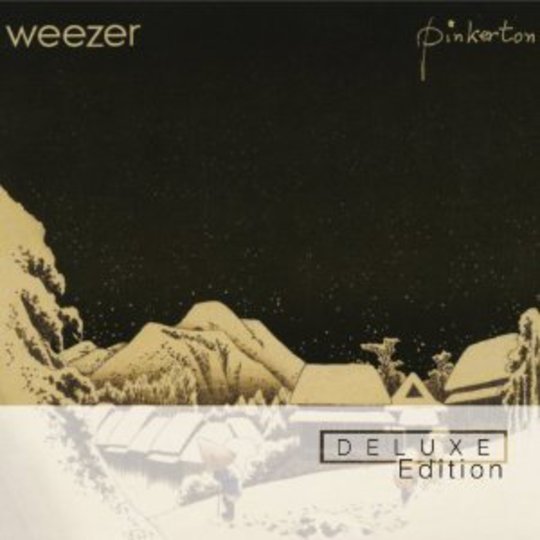 Weezer’s Pinkerton took on mythic status for my friends and I when we were teenagers. Not only because it was one of the elite few albums we could all agree on (take a bow Any Day Now, Doolittle, Relationship of Command), but also because over the countless chilly nights we spent playing cards in the ‘summer’ house at the bottom of my friend’s garden it also proved the only sure-fire method of sparking his stuttering separates back into life. It was amazing; unfeasible, really, but whenever that CD went into the tray you could bet your life that those keys, drums and that sludgy great bass riff that herald ‘Tired of Sex’ would come booming out of the speakers, and that they would sound just as brilliant, weary and vital as ever.

So it’s nice to see the record get its dues with this deluxe edition, if only because Rivers Cuomo seems to have finally caught up with the rest of us and stopped hating on it so much. I have to admit, I’m more in Pinkerton’s corner than I am the Blue album’s; I look back at the debut fondly (and, alright, it is simplicity and it is amazing and the way he screeches “Weepel!” is excellent), but it’s this one that really hit home for me. From the artwork to its threadbare closing track – ‘Butterfly’ surely being the sweetest, most vulnerable song Cuomo has ever put his name to, and one which for reasons I can’t recall will forever bring to mind Harper Lee’s To Kill a Mockingbird – Pinkerton is a wonderfully complete, meaty listen.

It is also (and it seems unfathomable now, how few people seemed to notice this at the time) absolutely brimming with killer hooks. Amid the raft of previously unreleased material here are spirited live acoustic versions of ‘El Scorcho’ (seriously, the cheer that greets its opening riff), ‘Pink Triangle’ and ‘The Good Life’, all of which go a long way towards illustrating what an accomplished songwriter Cuomo can be. Replete with harmonies, melodies and choruses to die for (“I’m dumb, she’s a lesbian” might look rubbish in print, sure) they all hang together on a backdrop of melancholy and sex that permeates Pinkerton.

The album itself remains a fascinating listen, Cuomo kicking out against the huge success that Blue earned them, painting himself in a creepily personal light and indulging his interests in Japanese culture (and girls). He sounds not so much like he doesn’t give a hoot about what you think, more like he hasn’t even thought that far ahead; bitter and disenfranchised throughout, but resigned to and at peace with it. He snarls his way through the thrashy ‘Why Bother?’, has a gas on ‘El Scorcho’; on ‘Falling for You’ he comes over all weak at the knees. But here’s the thing: ‘Falling for You’ is decent, ‘El Scorcho’ is funny, ‘Why Bother?’ is believable. In short, these songs are everything the band has been aiming for – and missing – ever since.

To really get a handle on the ‘deluxe’ nature of this reissue is all but impossible with a digital promo, but among the reams of live versions, radio sessions, piano noodlings, B-sides and alternate takes included lie a few previously unheard gems (the two-disc package weighs in at a hefty 35 tracks). Though Cuomo’s intimation that ‘Tragic Girl’ will prove a ‘You Know You’re Right’ for the Pinkerton cult is perhaps a little strong, it does close the collection in forceful, epic style, while ‘I Swear It’s True’ lurches unsteadily atop a chugging riff and nasty synth in a raggedly convincing manner.

‘You Won’t Get with Me Tonight’ is a relic from the ‘space-rock opera’ Songs from the Black Hole that would have stood in Pinkerton’s place had Cuomo not abandoned the project in its early days; many of the songs intended for it found their way onto Pinkerton or its B-sides in the end (Rachel Haden’s vocal on ‘I Just Threw Out the Love of My Dreams’ is a treat), while a lot of the rest appeared on Cuomo’s vault-clearing Alone discs of a few years ago. Some others also featured on those albums in demo form, the version of ‘Longtime Sunshine’ here bolstering its languid shuffle with a sweet a cappella coda.

Were Cuomo to announce something along the lines of Songs from the Black Hole today it would feasibly raise little more than a resigned chuckle among those increasingly disillusioned by the band’s favoured artwork or sterile exercises in power-pop. Not to present myself as too much part of that mindset, but… well. Listening to him scream himself ragged on the pulverising ‘Getchoo’ or offer frail and futile apology on ‘Butterfly’ feels so much more emphatic, so much more real than his asserting that the band “sleep all day and rock the night” on ‘Trainwrecks’ or listlessly grinding his way through the horrible, horrible ‘Beverly Hills’. The five albums subsequent to Pinkerton could be described as passable if you’re feeling generous; a bit shit, if you’re unkind. It is heartening and not a little bittersweet to be reminded how Weezer once made sad, twisted, broken-sounding songs like these, and they made them work, and they made our CD player work, and they weren’t a bit shit, and we loved them.