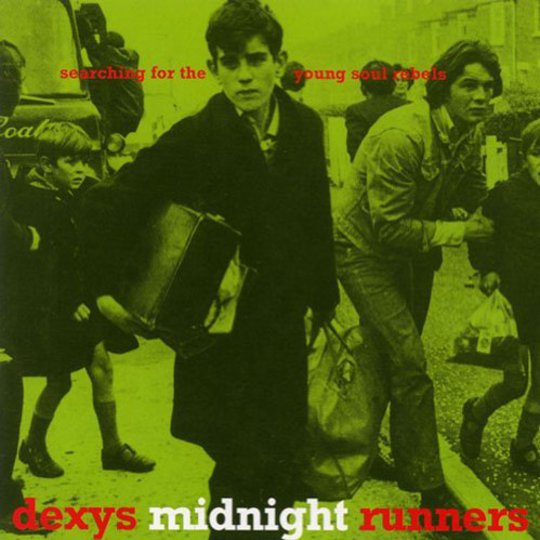 Everybody loves a good gang. That always impressive façade of solidarity and an us-against-the-world attitude. Historically, rock'n’roll is littered with them: The Who, The Ramones, The Clash and numerous other 'The' bands, particularly those that sprang up in the wake of punk. With historical perspective, Dexys Midnight Runners stand out as one of pop music’s most enigmatic and unique gangs, their brass-heavy brand of soul rebellion wildly standing out from their post-punk contemporaries.

Quite apart from the bold appropriation of a Sixties soul sound, Searching For the Young Soul Rebels is defined by the confessional airing of insecurities mixed with that insatiable drive for passion which pervaded all of Dexys’ work. Kevin Rowland’s slightly strangled voice is as important an instrument as any in this respect:; lacking the conventional qualities of a good soul singer, but in its yelps and pleas imbued with enough fervour for the entire group. Indeed, Rowland’s personality often overshadowed the entire group. He was the (very big) heart and soul of a Dexys whose line-up changed dramatically with every album. Yet every gang needs a leader and it was through Rowland’s excellent command of image and treatment of every album as a sort of project that meant Dexys were a fascinating and ever-changing force.

Of course the downside of such well defined group aesthetics and sounds is that one incarnation of the group can overshadow all others. On telling people I know that I was reviewing Dexys several slated them as one-hit wonders (actually two-hit wonders and more if we go beyond mere no.1s) and a certain person called them “those gay village people” (er…I think that’s The Village People). For many people though ‘Come On Eileen’ is just a wedding reception piss-up tune (as opposed to one the greatest singles of all time) and Dexys will always be those guys in daft dungarees, one of whom looked suspiciously like Eidur Gudjohnsen.

Rightfully, however, consensus amongst more enlightened types is that the first incarnation of Dexys was the most coherent and vital one. Their blue collar docker-like image, the puritan discipline of pre-rehearsal communal running, the righteous anger, the desperate purging of the soul (music). It all fitted perfectly. Likewise, Searching For the Young Soul Rebels is their most coherent and consistent record. In fact it’s damned near perfect.

Its greatest moments bookend the record and demonstrate that although Dexys were an anomaly on the pop landscape of 1980, they also bore the angry young man sentiments of a band for whom punk remained a catalyst. Album closer ‘There, There My Dear’ is a vitriolic open letter to hipsters delivering knockout hooks of brass as Rowland derides the meaningless namedropping of “Cabaret, Berlin, Burroughs, J.G. Ballard, Duchamp, Beauvoir, Kerouac, Kierkegaard” and decries facile pop music (I’d only waste three valuable minutes of my life with your insincerity). The most breathtaking moment comes when Rowland laments his fruitless search for the titular “soul rebels” over Pete Williams’ throbbing bass and staccato blasts from the brass section leading into a frenzied finish.

Although the cover of the album depicts a Catholic schoolboy in the midst of being driven from his neighbourhood in Belfast in 1969, Rowland admits the photo was chosen for aesthetic reasons rather than political ones. Nonetheless album opener ‘Burn It Down’ is pseudo-political in tone, the chorus chants of heavyweight Irish literary figures’ names, from Oscar Wilde to George Bernard Shaw, a fierce rebuttal to insulting condescending attitudes to the Irish. The stabs of brass are like an exclamation mark as Rowland spits the phrase “Shut it”. It also boasts one of the most distinctive album openings ever; snippets of The Sex Pistols, The Specials and Deep Purple are discernible amongst the hiss and squeal of an old radio before Rowland and co interrupt with group chanting and blaring brass. A similar horn section melody kicks off ‘Tell Me When My Light Turns Green’ which is tonally and rhythmically a more upbeat affair, but paradoxically is a vehicle for Rowland to emote tirelessly about being down on his luck (“I’ve been spat on and shat on and made to eat soap”) and pleading for help, seemingly, from a higher power (“If there’s anyone there looking down on me, I think it’s time you picked my number). In comparison, on ‘I’m Just Looking’ Rowland’s pathos is all-consuming. The church-like organ provides a melancholic base around which the dynamic playing of bassist Williams and the brass section punctuate the melodrama with timely staccato blasts. The opening verse reads like an affirmation of the group’s puritanical outlook, “Uppers give heart impotence, but don’t tell you anything”. However, ‘I‘m Just Looking’ is topped by ‘I Couldn’t Help It If I Tried’ in terms of the album’s downbeat songs and, outwith the album’s rousing anthems such as ‘There, There My Dear’, is the most emotionally affecting song with its powerfully mournful brass section.

If the number of times I’ve used the word “brass” should suggest that Searching… is a samey affair, then just listen to the way the giddy ‘Thankfully Not Living In Yorkshire It Doesn’t Apply’ follows ‘I Couldn’t Help It…’ with deft organ fills and Kevin Rowland’s daft falsetto trills. While later incarnations would ditch some of the brass and bring in folk instrumentation, it’s astounding how Dexys Mk.I exhibit such a range of expression and musical ingenuity whilst still retaining a signature sound. They were unafraid of wearing their influences on their sleeves either with chart topping single ‘Geno’ a tribute to Geno Washington and ‘Seven Days Too Long’ a cover of a northern soul classic. The only misstep is the slightly comical sound of Kevin Rowland doing a monologue over a wailing saxophone solo on ‘Love Part One’.

So, a great album indeed, but why should anyone care to buy this predictably expanded anniversary re-release? The original album itself sounds much the same as previous CD versions, but then it was always a well produced record, the sumptuous warmth of the brass captured by producer Pete Wingfield being quite astounding. The second disc of A and B sides, demos and Peel sessions merely illuminates this fact, with ‘Dance Stance’ - the original single version of ‘Burn It Down’ - losing some power with its raggedness, whereas on ‘I’m Just Looking’ Rowland’s voice is discomfortingly close. Their covers of Aretha Franklin’s ‘Respect’ and ‘Breakin’ Down the Walls of Heartache’ by Jonny Johnson and the Bandwagon are great, but three versions of the latter is overkill.

Yet, 30 years on this reissue reaffirms the status of Searching For the Young Soul Rebels as a landmark British debut album, the inimitable idiosyncratic genius of which is as potent and soulful a force as ever.

Darren Hayman and the Secondary Modern