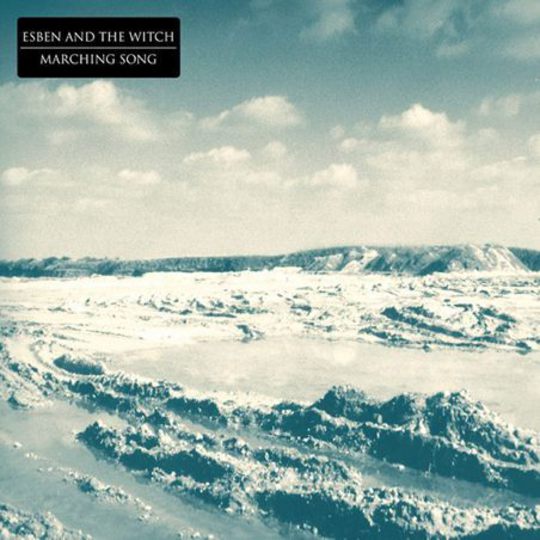 As a band who were reasonably hyped at the start of this year, Esben And The Witch have probably done the sensible thing by taking their time about getting into gear – a 7-inch here, a few gigs there. Now signed to Matador, they’re still reluctant to rush, teasing their curious audience with a three track EP.

It has to be said, that with Marching Song, Esben And The Witch don’t quite do enough to shatter any cynicism around their assumed acclaim. But they’ll keep people interested, and at this stage, that’ll do.

The title track begins (as you’d expect, I suppose) with a plodding, stomping, marching rhythm, thickened by gothic, psychedelic guitars that ghost shapelessly around the music. The texture snaps downwards to a simple looped riff that would be just as well suited to straightforward indie-rock or pop-punk, if it weren’t so drenched in atmospheric reverberations. Semi-conscious vocals continue the shapelessness of the band’s sound, even as they become more forceful.

There are dramatic pauses before the marching drums return, though the track never quite kicks in – just getting noisier until it collapses in on itself. It does leave you feeling that more could have been done to give the abstract sounds meaning, or that this would work better as an intro piece to a longer record. Not enough happens for ‘Marching Song’ to stand alone on a record this brief. It does well to keep your attention, given its lack of form, but it’s easy to wonder why it was so desperate to do so.

‘Souvenirs’ builds from a bleak guitar that captures the unsettling, apprehensive uncertainty of an album like Hail To The Thief. But the chord changes and vocals are more theatrical, sounding more like Bat For Lashes. This opening section would make a good verse in a song by another band, but left in the hands of Esben And The Witch, it disappears into abstract atmospherics and complexly processed vocals. A guitar tries to assert itself to reintroduce some sort of structure, but doesn’t quite make it.

With just one track left, the worry is that while Esben And The Witch are good at creating atmospheric music, they are struggling to prove that they can write good songs. The burden is left on the shoulders of ‘Done Because We Are Too Menny’, whose simple minor guitar chords give way to ceremonial piano and Eighties slasher movie synths.

The mournful bridge that reveals itself, with vocals that hoot and howl eerily, suggests that this track will be more tightly structured than its predecessors. This suspicion proves valid as the verse kicks back in, more determined and resolute. Here, Esben And The Witch are highly effective at painting a picture with their music, full of haunted forests, feral beasts, howling wind and torrential rain. As a finale, the track breaks down and builds back up again, making it far more of an interesting journey, with peaks and troughs, than a frustrating uphill struggle.

As with the rest of Marching Song, it never kicks in as such, merely settling on a persistent beat and a strangled synth, becoming louder and more invasive. But the key difference is that the duration ‘Done Because We Are Too Menny’ spans more than half of this whole EP. This makes it long enough to develop into a beautifully intricate piece of music, compared to the other tracks which were cut off short. The test for Esben And The Witch now, is to see whether they are confident enough to write more songs that feed off their own momentum rather than spluttering to a halt under the strain of their ambition.