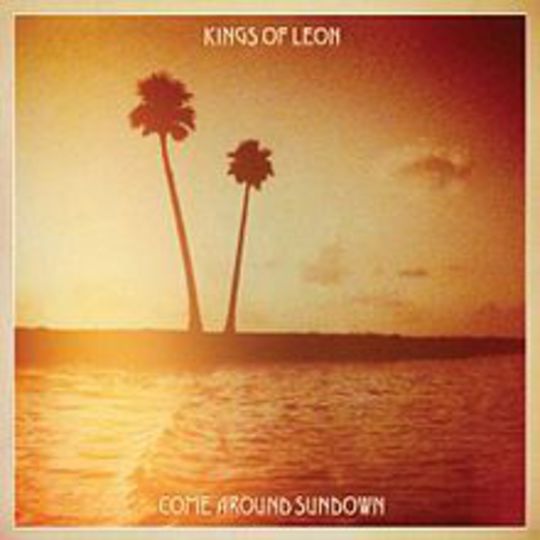 Kings Of Leon see, are the bitter taste of what the music industry is all about. Like one Sambuca chaser too many or a partly digested curry the morning after, despite its packaging disguising itself as an upmarket holiday brochure, Come Around Sundown is little more than a well produced sick bag of nauseous atrocities. If it had come adorned in a plain white sleeve emblazoned with the words 'CASH COW' in bold Times New Roman it would convey a more appropriate message.

Of course it would be prudent to defend the Followills as being easy targets for what serves as little more than elitist vitriol were it not for the fact that this record, like all four of its predecessors, barely rises above the level of 'mundane', let aloneto the majority of mere mortals as 'average'. Far from being the difficult fifth album, Come Around Sundown must have been one of the easiest albums in history to put together. After all, when your last record shifts in excess of six million copies worldwide, the old adage "Record one's self farting in a glass and Joe Public would still buy it" springs to mind.

What's more worrying is the number of up and coming bands that aspire to Kings Of Leon's status, music as a seemingly lucrative career incentive rather than creative pastime. How any so-called artist could wish to contemplate reproducing what is an already derivative sound pilfered from the likes of Bruce Springsteen and Oasis only they can answer, but sadly there's a disorderly queue already forming round many a block.

I guess in many ways it isn't the band's fault both 'Sex On Fire' and 'Use Somebody' went stellar commercially. After all, what's the point in writing a song and going through the whole rigmarole of recording, producing and distributing the damn thing if some kind of reward isn't reaped at the end? No, all the forcefeeding that followed highlighted was the sheer banality within Kings Of Leon's musical palette, particularly the lyrics. When Art Brut's Eddie Argos recently asked the crowd at Offset Festival "My Sex Is On Fire....What does that mean?" he wasn't being ironic. Take 'Back Down South' for example, Come Around Sundown's semi-acoustic midpoint, meandering along aimlessly amid such drab couplets as "Underneath the stars, where we parked the cars". If that isn't enough to make anyone cringe, the Eighties pastiche of 'Beach Side' will. Think Kenny Loggins 'Danger Zone' performed by Alphabeat or some other kitsch entity, except having rewritten the words to incorporate such random irrelevance as "I never look back at all the things I've ever done, I never look up seeing that he's on the run...". Who? Where? Whaaat? When Caleb Followill declared recently that all the lyrics on Come Around Sundown were ad-libbed during recording rather than structurally written beforehand he obviously wasn't lying. Just when you think it can't get any worse it actually does. "You come on legs and your pantyhose, you look so precious with your bloody nose" introduces the ungainly retrocentric 'Birthday', which seems to have gleaned its inspiration from long forgotten Scottish also-rans Big Country.

Focusing on what is wrong with this record - i.e. pretty much everything - is an easy pastime. Saying that, there are some positives, albeit few and very far between. Angelo Petraglia and Jacquire King have once again mustered a valiant effort transforming this dog turd of an album into something with a sheen and wholesomeness in a similar vein to Only By The Night. The big difference between the two records undoubtedly appears in the way King at least accrues more emphasis upon the instrumentation, especially Nathan Followill's drums, and as a result the likes of 'Pony Up' and lead single 'Radioactive' go for the U2 coordinated jugular and mostly manage to pull it off. Likewise 'Mary', its Glitter Band stomp sounding like it could have crawled off an episode of Crackerjack circa 1974, save for the goddamnful lyrics (again). Then there's 'The Face', which in hindsight arguably stands as one of the most accomplished pieces of music the Followills have been involved with, its glissando themed bluster and melancholic demeanour giving way to a big brash chorus, the simmering cry of "Ride out the wave" seeming most appropriate for such a grandiose statement of intent.

Sadly that's your lot, as at other times their audacious attempts at emulating the rock'n'roll legends of yore go drastically wrong. 'The Immortals' trys embarrassingly hard to be The Clash, down to the Strummeresque title, the lolloping bassline and quasi Jamaican accent employed by Caleb Followill, who obviously wants this to be heralded as the second coming of London Calling. Unfortunately, despite his insistence "The path of greatness is at your fingers", the song itself quickly hurtles into cod reggae territory before ending up sounding like The Police, which as any self respecting purveyor of taste will know, isn't a great juncture to arrive at.

Overall, Come Around Sundown is pretty much what anyone would have expected the successor to such a commercially successful enterprise as Only By The Night to sound like, be that fan, foe or otherwise. Only the bravest of men would wager against this topping the best seller lists when 2010 draws to a close, which inadvertently constitutes a travesty in itself. Come Around Sundown is musical wallpaper for those who purchase such amenities from the likes of Tesco or Asda. It represents little more than a giant turd amidst a sea of mediocrity, several million of which will shortly be appearing in homes near you. You have been warned.