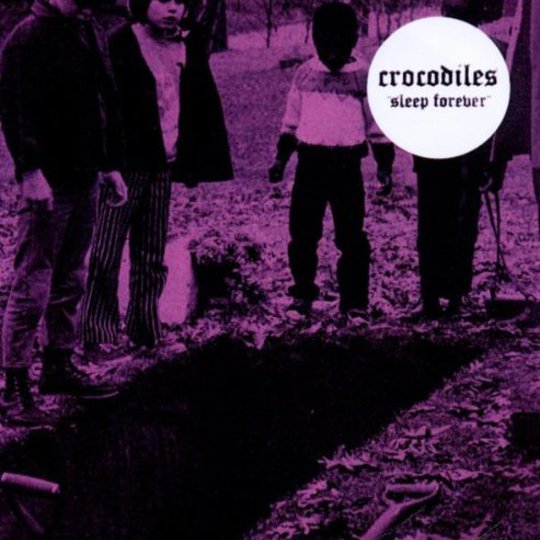 If being in a great band was a series of boxes one needed to tick, Crocodiles would be doing more than riding the success of their moderately received debut, Summer of Hate. With vaguely apt comparisons to Jesus and Mary Chain, Spaceman 3 and The Velvet Underground, uber-producer James Ford at the helm, and Ray Bans permanently affixed to singer Brandon Welchez's face – one might believe that the latter half of 2010 would be Crocodiles' time to shine. Having moved from a duo to a five piece, a fuller, more brash, less punk sound emerges from their recording sessions in Joshua Tree, CA. An unfortunate indulgent hush overwhelms their second effort, Sleep Forever.

The first three tracks skate along, into one another without much notice from the listener – which, with Sleep Forever only eight tracks is a major portion of the album. ‘Mirrors’ tests patience with its minute-long dripping-with-reverb opening, before launching into a mildly intriguing wall of guitars. However, it’s the beginning of an album-long list of badly placed clichés: “There’s something in the way you crucify me / that makes me smile”. Trimmed down to three-minutes, the track might have held a little more sway. 'Stoned to Death' also begins with a wildly infectious, mildly filthy melody but is held back by mid-and-late song indulgent fuzzy freak-outs and more lyrical banalities: “…In the garden of your head / the flowers brittle, brown and dead”. Unfortunately, on 'Hollow Hollow Eyes' the simple, catchy keyboard line is negated by the overwhelming Sleeping-Beauty-esque lyrics lamenting the “poison apple”.

'Girl in Black' is the biggest disappointment on the record. The indulgence that is fairly obvious in most of the album overwhelms what could have been the standout track. How infuriating it is to realise that Crocodiles have songs that would do very well, trimmed of their five-plus-minute-fat and condensed into less-than-three-minute reverb and keyboard lead hazes. This lightly soaring, evocative ode stretches on for far too long.

Following 'Sleep Forever', the title track, the album picks up speed somewhat, moving with a machine-like urgency, which is a welcome change. The woozy melody and the underused synth come together wonderfully, as Welchez croons “I will love you until the sky above you shatters over you”. “Hearts of Love” has a surprisingly tender vocal harmony overlaid with simple twinkling keys, shimmering in the background – it is the first track that expresses an attitude less snotty than the ones that Crocodiles have supposedly left behind. The song wears its influences on its chest but the bright chorus and the Smiths-y riff shine.

There is the potential for something more than a mildly decent album in Sleep Forever. It's the arrogant self-indulgence that really holds the album back from being what it could be. Sleep Forever won’t actually put you to sleep, but it won’t stir anything else up, either.