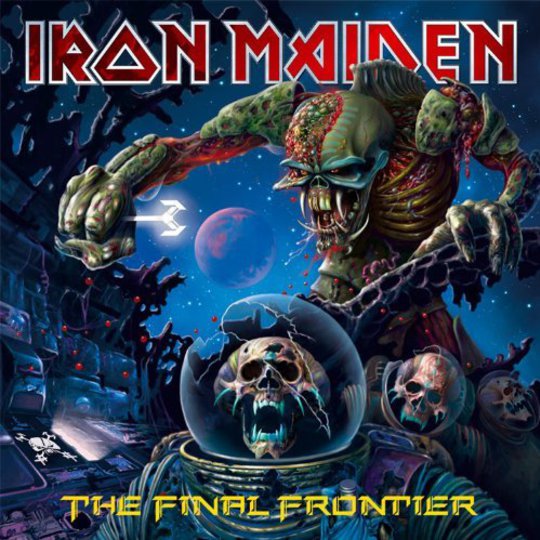 Another few years roll by, and as sure as night follows day, a new Iron Maiden album appears. They've hardly been quiet since A Matter of Life and Death in 2006, but it's been a long time since they've been in the limelight with new material. Accordingly, The Final Frontier has sold very well indeed, with their rabid fanbase hungry for new material. It's a big commercial success already, and the critics have been raving about a continued run of good form. But is The Final Frontier really up to snuff?

In terms of construction, the album is hard to fault. 'Satellite 13' is an imperious and ominous drum-led intro, and it oddly sound like nothing they've done before. Nicko McBrain hammers the double kicks, giving them the urgent rhythm of a firing squad, as a guitar squalls above them. The little scene setter has Dickinson rasping a few words about being a starship pilot drifting off course. Then we're into the opening track proper, 'The Final Frontier'. It's traditional Maiden fare, with Dickinson's operatic vocals, the veteran rhythm section of Harris and McBrain pushing everything forward, and the triple pronged guitar attack of messrs Smith, Murray and Gers battling it out between themselves. After the promise of the intro, the title track is a little anticlimactic; suffering from hackneyed rhymes and ham-fisted lyrics (even though there's a fanboy pleasing nod to 'The Flight of Icarus'). At points the vocals are needlessly double tracked; these little faults combine to stop it from being a song that really tears away from the starting line.

The single 'El Dorado' is next. And it's a reasonably strong song about the folly of Mankind's quest for riches throughout the ages, as told by the Devil. Very Heavy Metal, and effortlessly direct, it is an obvious choice for a single, and almost the best thing on here. Sadly, it is followed by the chuggingly predictable 'Mother of Mercy'. Here Dickinson's delivery wavers half way through, as he has to squeeze extra words into a lyric that doesn't scan properly. The invention hinted at earlier on has vanished, and is replaced by a stoicism the listeners themselves will be desperately in need of by the end. 'Coming Home' is a little better, classically soaring double-tracked riffage giving way to a semi-acoustic strum. Ostensibly it's a song about flying into space, but the words seem to be drawn from Dickinson's experience as an airline pilot. In fact, when he talks about coming home to Albion's land, it recalls a recent memory of when he chartered a jet and flew back stranded holidaymakers from Egypt and Greece. He's still not afraid of voicing giant over the top symbolism, either; when he sings "We will ride this thunderbird" there isn't a hint of irony. It sounds like a line that was intended to play well in stadiums worldwide. The song itself is a little flat, even though the opening and closing riffs hit the nail on the head, there isn't much to it. Only the two back to back solos towards the end lift it from general mediocrity.

'The Alchemist' is a highpoint, taking the tempo back up to a spirited gallop, showing the listener there's still a bit of life in the old beast. A fair old romp it is too, the shortest thing on the album at just shy of four and a half minutes. If there's a second single to be had, it should be this. The band save their best performance for it, and it channels their former glories well. Nothing else here matches the intensity on display, and even if Dickinson seems to strain to hit and hold the harder notes, there's some credit to be had in the fact that he's still even attempting them 15 albums in.

The standards sink fast after this high watermark, and don't rise again for another half an hour. But even with a deep trench of filler, that still leaves time for the epic 11 minute closer, 'When the Wild Wind Blows'. Apocalyptic and grandiose, there's a lot to like about it. It shows the subtlety and craftsmanship of the four songs that preceded it, but adds an emotional depth that they seemed to lack. While sometimes The Final Frontier seems to mine the Maiden groove until the canary chirps its last, the better songs are an indication that they aren't yet trading solely on their reputation.