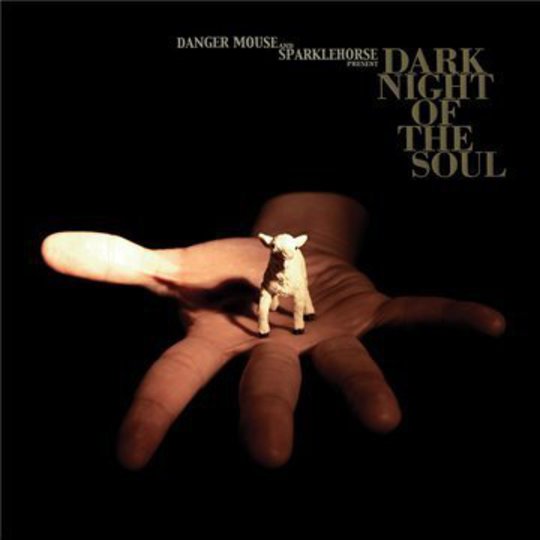 Dark Night of the Soul is a record with much backstory. To recap: following a legal dispute last year with EMI, the 'record' was released as a 100-page book with a blank CD labelled 'Use it as you will'. The music had leaked by that point, so that's pretty much an endorsement... However, that wasn't the end, as you are surely aware. The record has been given extra poignancy by the tragic loss of Mark Linkous by a shot to the heart (not that this is his last hurrah – the final Sparklehorse album was all but finished, and will presumably emerge at some future point). And not that that is quite the end of the story either: collaborator Vic Chesnutt died of an overdose of muscle relaxants late last year.

So, finally, Danger Mouse and Sparklehorse's collaboration sees an official release, much belated, and with potential sales slightly shafted... Does that matter? Only in the sense that we've all had a year to listen to these songs – the flush of the new is gone. They can be looked at in some kind of an objective way (not that there's any such thing).

Opener 'Revenge' puts us in familiar territory. This is a Sparklehorse album by another name. 'Just War' could easily fit onto Dreamt for Light Years in the Belly of a Mountain, a sweet woozy American pop song with elements of bucolic Western desert cruising. It helps that many of the singers manage to co-opt Linkous's vocal patter, Wayne Coyne and Jason Lytle in particular.

Iggy Pop is one of the star turns, declaring “I'm a mix of god and monkey” in a run of three rockier songs a third of the way through. 'Pain' is dark, raging guitars and baritone horror vocals crowing or bemoaning that “Your pain is all that will remain.” Tender is 'Star Eyes (I Can't Catch It)', a woozy Lynch vocal over a burble of static, synths, and glockenspiel. Stirring strings make it a gentle moment of striking, wistful brilliance.

Often the collaborators bring something of their own feel to things – Julian Casablancas gets those tricksy Strokes guitar parts on 'Little Girl', Jason Lytle emphasises the similarities between Sparklehorse and some of his work on the Sophtware Slump-esque ballad for the common man 'Jaykub'.

Ultimately though, this feels much more like Linkous's work than Danger Mouse's, or anyone else. Brian Burton's contribution can be felt in the burble of electronics working behind the music, the great production job, the wide range of star turns. Overall though, in what Burton has admitted was a “difficult” recording process, it seems that Linkous won.

The title seems apt given the troubles around (not with) the record, and the melancholy words. “The more that I hurt you, the more that it hurts me” on 'Revenge', “Where did all the wine go? / Every night it's gone” on 'Little Girls'. Vic Chesnutt's piece, 'Grim Augury', with its morbid tale of abortion with an antler-handled carving knife, empty, haunting waltzing keys and bereft croon is another heartwrencher in an album full of them.

It all fits in with the dark rock star story (not that it was ever a story) of Linkous – the addiction, being wheelchair bound for six months, the depression. Linkous was never comfortable with playing that role, always content to stay as much in the shade as possible. It perhaps explains why his presence here is limited to instruments and (song)writing, the voice muted and muffled behind strings, keys and notepaper.

As hard as it is to criticise the work of the recently dead, Dark Night of the Soul is not perfect. It does not form Linkous's crowning achievement (hopefully that'll come with that final Sparklehorse record), as good as it is. Sometimes it is a bit over-pastoral. 'Daddy's Gone' seems a song by rote, written on autopilot. It also features a kettlewhistle sound buried in the mix, that once heard becomes louder and louder, until the melodies are drowned and die.

Often collaborative projects end up being an average of its participants, merging in the middle in a grey mulch. Dark Night of the Soul escapes all of that, Sparklehorse bringing the songwriting genius, and Danger Mouse the production, and the details - the watery sounds, the effects, the atmosphere. The sequencing gives the sense of a narrative, although most of the music seems to be of a similar feel, to be drawn from a similar mood. This may not be the epitaph for Mark Linkous, but it's certainly a great tribute to his talents.