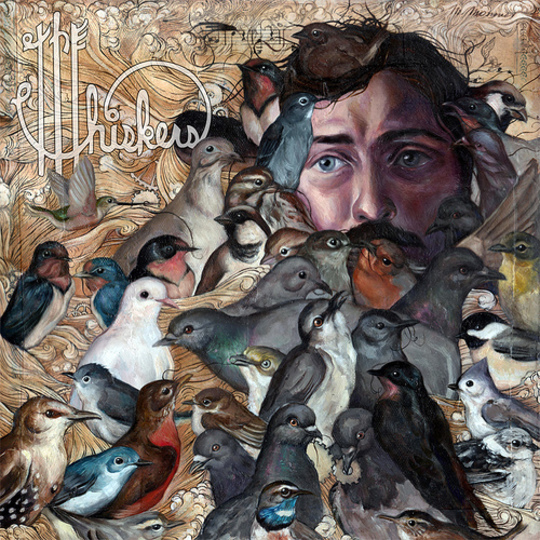 Okay, so that’s subjectivity raised to the n-th degree, but The Whiskers – who formed through the mediation of a Frog Eyes message board – often sound like a microscopically observed homage to not just one weird band, but the whole damn Axis of Krug, namely: Sunset Rubdown, Swan Lake, Frog Eyes, Blackout Beach, Destroyer… and even throw in some of their tourmates for good measure, like Xiu Xiu and Elfin Saddle. Perhaps in an effort to throw off the older influences, new album War of Currents builds its surreal ballads up from seesawing acoustic riffs stretched out to six, seven, eight minutes, and adds brass, entering Neutral Milk Hotel territory. But with a cast of vampires, ghosts, swans, and seamstresses sewing wings onto doomed lovers, the shadow of Spencer Krug is still cast over quite a bit of it.

Formed around Connecticut-based brothers Thom and Jim Stylinski, the Whiskers are a shifting, pan-American collective. You could call it a Prog revival, if it’s understood that The Whiskers are far more accessible than that makes them sound, if not instantly likeable. Albums one and two (The Whiskers and The Distorted Historian) took the Frog Eyes formula of lo-fi garage-prog with rapid-fire lyrics starring mythical figures, and substantially improved on it with f/x-heavy synths and programming that explodes in several directions at once. That might make The Whiskers sound like a completely different band, but it’s those unplayable, machine-generated sounds that replicate Frog Eyes’ dozen-ideas-a-second, while (paradoxically) having more emotional impact for being tight in a way Frog Eyes just aren’t.

With their third album, War of Currents, The Whiskers have largely retired the synths, and taken a crack at the multi-segmented epic song, with the example of In the Aeroplane Over the Sea or Sunset Rubdown’s Dragonslayer behind them. In a nutshell: it’s a masterclass in epic songwriting, which only falls short of greatness in its reluctance to vary the (new) formula. Then again, unlike yer-akshel Seventies progsters, The Whiskers never bore or jar by dropping in unnecessary movements; always unifying their songs with a strong riff or chord progression.

Granted, there are other precedents for this seven track, 42 minute album, but with songs like ‘The Seamstress’ you have to wonder whether they’re not attempting a deliberate patchwork of Krug-isms (in this case: ‘The Mending of the Gown’ spliced with ‘Shut Up, I am Dreaming of Places Where Lovers Have Wings’). When Krug sings about chameleons and leopards, morticians and magicians, you know he’s fretting about the nature of performance, even as he mythologizes it; when Stylinski adopts many of these figures (and adds a few of his own, like ornithopter-pilots and wing-walkers), for better or for worse, it feels as if you’re cutting straight to the fantasy, unmoored from the personal. (Not that he doesn’t have plenty of original, deliciously quotable moments: “you married on the ferris wheel / honeymooned in the haunted house / you were buried in the cemetery / I want to blow the winter out of the sea…”).

Elsewhere, the Stylinski brothers deliberately mimic the vocal interplay of Bejar / Mercer / Krug on the Swan Lake records (those three songwriter showdowns), and as if they’re worried no-one’s got the point, they even pull Dan (Destroyer) Bejar’s trick of quoting classic pop songs in a comically different key (on ‘Birds of Paradise’: “bird-bird-bird / bird is the word / everybody’s heard / about the bird…”). Somehow, it always comes across as affectionate rather than lazy, fun rather than tired, which is more than good enough for most bands. Keep watching this space for greatness.