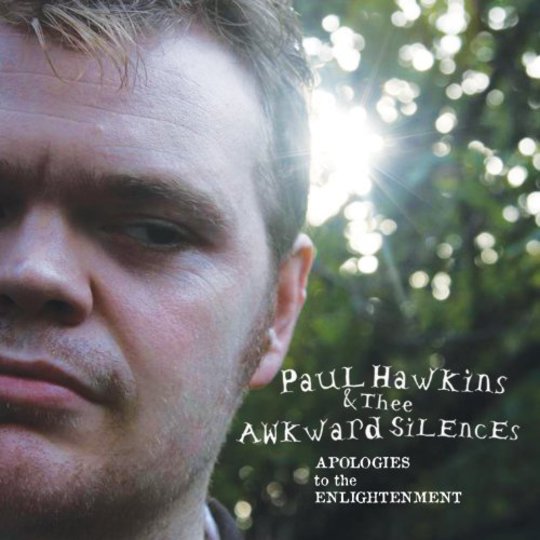 We've probably all been told at some point or other that life isn't easy, as though that blanket statement should explain everything. Of course it's a bit more complicated than that. Paul Hawkins and Thee Awkward Silences' Apologies to the Enlightenment is a multi-dimensional hour and a half of 'life isn't fair.'

It's a record for the so-called creative classes, or at least anyone who has ever dared to follow a creative pursuit and dealt with the inevitable struggle entailed therein. So Hawkins sounds pretty pissed off most of the time. The album opens with an evil grumbling while someone recites the Lord's Prayer before rolling into a sneering, scratching, Scott Walker-inspired riff on human destruction.

It's a challenging listen for length alone — as a double album where songs run seven and eight minutes, it takes commitment to give it a full spin. No song itself feels superfluous, but some do leave you wondering if that final chorus or that verse in the middle was entirely necessary. And while Hawkins' lyrics are very clever and spot-on in their assessment of human emotions, they're often a little too complicated to get stuck in your head.

Still, Hawkins isn't abrasive; while the verses of 'Epilogue' are raw and hard, the airy, choral intro, previously visited on 'The Day The Music Stopped,' and punchy chorus proves that Hawkins is capable of writing a pop song if he pleases.

His sometimes atonal vocals are set to well-orchestrated and often complex arrangements (including, ironically, pitch-perfect backing vocals). The multi-layered, competing vocals of 'The Lowest Low' make for some of the finest moments on the album. Hawkins' deadpan vocal delivery works to great effect on slower songs where the lyrics becoming more disarming when whatever disturbing thing he has sung finally processes. In his more aggressive turns, Hawkins' voice stays steady as the tension builds around him.

But mostly there is a focus on success versus failure, with the latter edging out the former. 'Eddie The Eagle,' about the Olympic underdog, is a meditation on failure and the potential value of exploiting failure as the song's namesake had done. The unnerving lyrics layered over the child-like chimes makes for a thoroughly uncomfortable listen.

Failed loves are in there as well: 'The Yellow Castle On The Hill' -distressing for its subdued delivery - tells the tale of a kiss that could have been that haunts a man after years in an institution (which, in spite of the mental illness theme, sounds far less depraved to anyone who has reflected on his or her life [and loves] and thought about what could have been), whereas 'I'm In Love With A Hospital Receptionist' is just overtly morbid.

All of his musings on defeat seem to meet a conclusion that something is worth pressing on for or that time is wasted more in having not tried at all. It sounds a bit cheesy when not expressed in Hawkins' agitated eloquence, and the chorus of 'Epilogue' does echo Kenny Roger's 'The Gambler,' but as Apologies proves, something must be said for being too frustrated to give up.