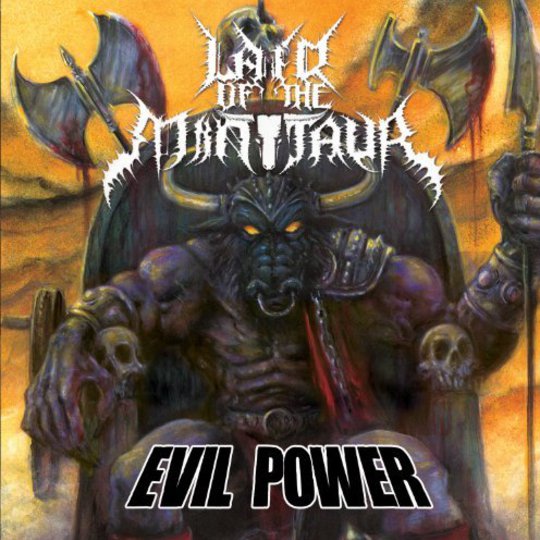 The ravages of time and the shrapnel lodged in my brain prevents me from remembering exactly who was being zinged in the following example, but one of the best openings to a record review I ever read went something like, 'If [band] didn’t exist, it would be totally unnecessary to invent them.' It popped into my head while taking in Evil Power, the fourth album by Chicago metalheads Lair Of The Minotaur, except in their case it’s more like: if Lair Of The Minotaur didn’t exist, it would be necessary to invent them, but only for music journalists who need a readymade example of how metal is funny and cute and not really to be taken seriously.

I appreciate that this is largely not the fault of the band itself, but the press that they got off the back of their (pretty decent) 2008 album War Metal Battle Master was pretty much wall-to-wall lazy, condescending trash. You could tell it was penned by people who didn’t much care for metal, just its iconography and ability to act as the butt of jokes, from the fact that everyone regurgitated the press release titbit about them having a burger named after them at a restaurant in their home city. (To be fair, it sounds pretty nice.)

Reviewer-reviewing aside, Evil Power is an album with occasional moments of pretty great-ness that, all ends up, doesn’t suggest that LOTM are going to make the proverbial step up from metal cultism to big league ballin’ – the one that Mastodon have more or less accomplished since signing to a major, and the one people have chatted idly about with regards to High On Fire. It does have something over the new album by the latter, certainly, in that its production is treetrunk-thick and the work of someone who knows heavy metal sonics inside out. Sanford Parker, Chi-town knobtwiddler to all manner of fine independent sluggers, is the man to praise, as he often is.

Interestingly, though, Parker buffs the trio’s chugging – faster than Southern sludge, slower than Bay Area thrash, on nodding terms with both – in a way that emphasises LOTM’s passing similarities to Lamb Of God and other bands that got called ‘New Wave Of American Heavy Metal’ for a hot minute. Certainly, there’s no real reason why a whole album of tracks like ‘Hunt And Devour’ (uninspiring as this would be) couldn’t catapult our charges onto a midday slot at Ozzfest. That and a record label with a very big pile of money. (As The Grind-House is LOTM’s own label, the band having previously recorded for Southern Lord, this isn’t likely for the foreseeable.)

When Evil Power is at its most whacked-out, like the pigsqueal flirtation with black metal ‘Goatstorm’ (moreover, the album’s highlight), it goes some way to separating them from the sump. The spoken word vocals on ‘Death March Of the Conquerors’, the album’s closing track (a brief album it is too, 11 songs in just over half an hour), offset the slow, leaden rumble rather neatly too. ‘Let’s Kill These Motherfuckers’ is growly and bearish enough to recall the majesty of Scissorfight’s ‘American Cloven Hoof Blues’ – a no-foolin’ unsung classic of the last decade of metal, while I’m here – so for this reviewer at least, that guarantees LOTM some goodwill.

Metal enthusiast or not, you might well have cast your eye over the songtitles I’ve mentioned and raised an eyebrow. In seemingly attempting to tap into the bravado and grand guignol that has traditionally powered the genre, LOTM have cooked up what comes off like the product of a ‘random metal songtitle’ generator, an extreme herein being reached with ‘Riders Of Skullhammer, We Ride The Night’. Singer and guitarist Steve Rathbone spent much of the Nineties in ribald grindcore band 7000 Dying Rats, which does mean that if he now presents something that may or may not be an attempt at a joke, most people will assume it’s a joke.

It is, of course, perfectly possible for metal to make with the funny and still be great, and from time to time on Evil Power Lair Of The Minotaur hit a spot sweet enough to suggest they might make a legit banger of an album one day. Right now, though, with High On Fire and Black Breath and Nachtmystium and Midnight and Coffins and Salute and The Gates Of Slumber and a bunch of others unscrambling the puritanical metal code in ripping fashion, it’s hard to get truly excited about these guys.