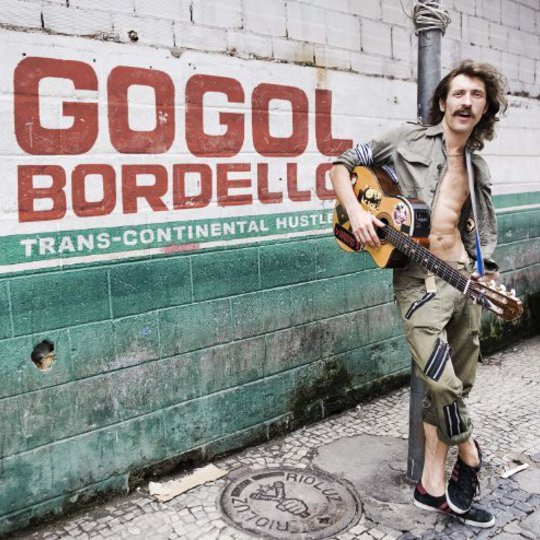 Eccentric is not the word for Gogol Bordello; it’s full-pitch, blood curdling insanity. No surprise that they’ve been invited to play the likes of Tate Modern and the Venice Beinnale - that they are, y’know, critically acclaimed - because this palpable madness manifests itself in music that is just plain interesting. Rough around the edges, honest but, above all, extremely interesting.

And for this, their fifth album, can you really imagine anything else? To the Lower East Side meets East European mix - which is already different enough from pretty much everything else in existence - Transcontinental Hustle adds a smattering of salsa. The clue is in the title; unable to shake the wanderlust from his gypsy blood, frontman Eugene Hutz has relocated to Sao Paolo. It’s clearly become a part of him, and any part of him is destined to become a part of his music. On ‘In The Meantime in Panambuco’, the guitar sounds distinctly Spanish, and a samba whistle over lyrics like "never did I fit the frame invented by the gringo", as well as referencing local firewater cachaca, completes the Latin look.

Just as much humour as ever, the record is often nothing less than sonic satire. It’s hard to hear it without imagining a heavily moustachioed Hutz hamming it up - somewhere between a polka and a pogo - on screen (see also: 'Start Wearing Purple' and 'American Wedding') or, even better, on the stage. And as with everything that’s slightly ludicrous, it can easily be loved: just try and keep a smile from your face as you listen.

For all its lightness, however, the sum of the parts feels like it means something. You may have to strain to understand quite what that something is at times, but it’s so heartfelt that it can’t be ignored. Throw away your throw away; this from the heart, to the heart. That something is this: at least in part, Hutz is on a mission to bring his much maligned Romani culture to a wider audience. And this dedication to the cause is just as obvious on their latest, with songs like 'Break The Spell': "Just because I come from Roma camp of the hill, they put me in a school for the mentally ill". Even when he complains "you love our music but you hate our guts", you definitely feel Hutz is having the last laugh.

For sure, there are moments when their tub thumper sounds become slightly strained; ‘Sun on My Side’ is as soft as they get and sombre gypsy-punk doesn't quite do it. Even the chorus seem muzzled; if you listen carefully you can almost hear the whole back line twisting and pulling at the leash. It’s fair to say Hutz's lungs work better turned up loud, much better when he belts it out with "frozen eyes, swelling black", as on ‘We’re Coming Rougher’, the track which follows. It’s certainly not singing, and it’s not quite shouting either, as always much of it is just strange sounds; incanting probably comes closest.

For the most part it sticks to that trusted voodoo formula and through Gogol Bordello they achieve another raucous record with summer in its heart, with life coursing through its full blooded songs. It’s natural born festival music, music for dancing, for head thrown back laughing. Music for losing your mind, music for life.

Over 13 tracks Transcontinental Hustle casts its spells, a record that fairly howls at the moon. It’s that mad girl with the glint in her eye; don’t attempt to understand her, just let her take you by the hand; go with it, and fall deeply in love. Let her cast her gypsy spell, you probably won’t come to any harm. It may make no sense but, really, have you any choice in the matter?