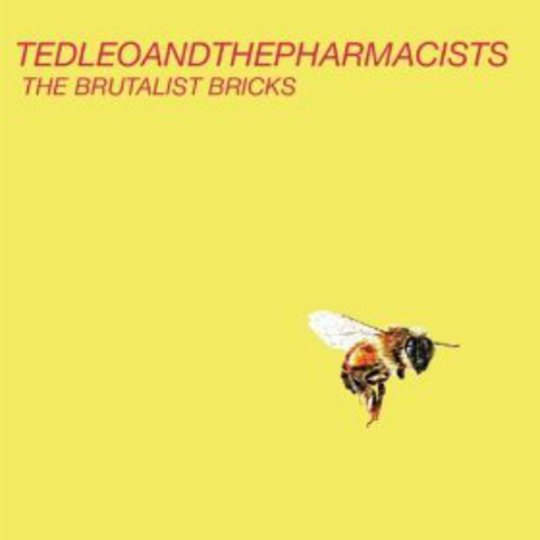 I like Ted Leo a lot. It’s hard not to. There aren’t many artists with impeccable punk credentials and a knack for writing shrewd lyrics and catchy melodies who also come across as utterly charming. So I’m probably a terrible person to review this album, because how can you judge fairly the work of someone you admire deeply and feel loyal to? I’ll try, shall I? I’ve enjoyed The Brutalist Bricks more on every listen, which has to be a positive. I prefer it to his previous album Living With The Living, which was too long and slightly dull. There, look: criticism.

Some objective facts: Leo is from Bloomfield, New Jersey. He enjoys English music. You can tell because he covers obscure bands like Chumbawumba, and because his band Chisel’s final album Set You Free is a love letter to the largesse of horn-addled Britpop. He’s also a Europhile, with many of his songs affectionately name-checking places from all over the continent. Nevertheless his music remains indubitably American-sounding. 'Adult-Oriented Rock,' an American might say, about The Eagles. Ted Leo is not like The Eagles. But that Seventies impulse to marry melodicism to heavy guitars is one that clearly feeds into his writing.

It’s hard to imagine a better melodic punk record than 2003’s Hearts Of Oak, and 2005’s Shake The Sheets was a harder-rocking reduction of that blueprint. The Brutalist Bricks lacks the immediate 'YES!' of those albums’ hooks and muscle respectively but slowly, inevitably, its melodies will creep into your whistling repertoire. ‘Mourning In America’ rides a catapult of spring-tight drumming from Pharmacist Chris Wilson, like the fiercest songs of StS. Leo’s voice is the star on ‘Ativan Eyes’ with his self-harmonising taking an otherwise average chorus to unexpected heights, like the joyous tunes that peppered HoO. Elsewhere there are convincing rockers powered by the urgent rhythmic playing of the Pharmacists like ‘Woke Up Near Chelsea’ and ‘Gimme The Wire’. The double-hit of groovy ‘Bartolomeo And The Buzzing Of Bees’ and acoustic curios ‘Tuberculoids Arrive In Hop’ remind you of the variety he is capable of, as on solo debut The Tyranny Of Distance.

In spite of Leo’s continuing successes musically, his words are now the real star of the show. It’s a shame they’re often indecipherable without consulting a lyric sheet, vocals feeling close but indistinct among treble-heavy production, as Leo has a gift for fitting clever language into short spaces without sounding preposterous. "Someone everyone organically can hang with / or someone cynically manipulating language?" he asks elegantly on ‘Mourning In America’, calling out Republican politicking. Later in the song he references the dubious opening to Ronald Reagan’s presidential campaign of 1980, without pausing for breath, never overshadowing the song’s righteous groove.

‘Bottled In Cork’ is an optimistic sequel to the paranoid travelogue ‘Ballad Of Sin Eater’ from Hearts Of Oak. Mentioning Munich and Copenhagen as well as the titular Irish city, Leo offers travel advice to self-conscious Americans, telling a bartender he’s from New York rather than Bloomfield because “sometimes the path of least resistance will gain you the most / more than trying to map the distance up and down the East coast”. That he can do this over one of the most glorious pop songs he’s ever written is testament to his lyrical gifts. It frustrates me that poeticism and evasiveness in lyrics tend to be prized above all when someone like Leo can express himself with clarity and flair, writing seamless words for pop songs that read like rousing polemic essays on closer inspection. He often covers politics (both personal and big ‘p’) and I’d expect that sort of writing to come with Billy Bragg-style plainness, music almost incidental to the message, or militant hardcore that's in service to the anger of sentiment being expressed. Leo's agreeable pop masks virtuous, timely messages that are jaw-droppingly well-delivered.

Oh, we’ve hit love letter territory, haven’t we? I’m sorry, there’s just too much to treasure here. The cutely awkward lip service Leo pays to his love of dancehall with a solitary siren in ‘Mourning In America’, the fact that he sings ‘One Polaroid A Day’ in a creepy blue-eyed soul croon and it’s better than 90 per cent of the Style Council’s output. There’s clearly great care to Ted Leo’s craft, but he has that rare knack of making it seem utterly effortless. Songs drip with melody but never lose forward momentum, often thanks to the sterling work of his Pharmacists. He manages to imbue his uncomplicated guitar playing with personality, his solos sound like smiles. The lyrics, I think we’ve established, are fantastic. After the misfire of Living With The Living this is a content, relaxed record with nothing to prove. Ted Leo is a man un-fussily playing to his strengths.