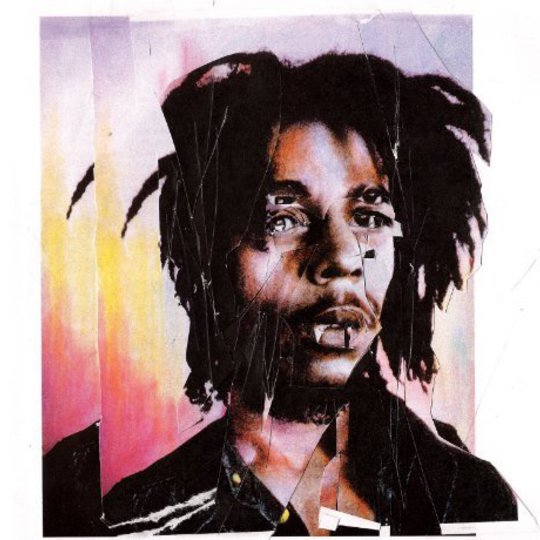 After listening to this record a couple of times I’ve decided that Daniel Marin-McCormick has one of the most annoying voices in music. I’m putting it out there. I can’t think of anyone with a singing voice that comes close. In fact, he doesn’t even really sing. Rather, he yelps, he squawks, he squeals, all of which is done in an odd falsetto. At times he comes close to sounding like Vic Reeves’ impression of a club singer from Shooting Stars, but in a higher register. The closet thing I can think to compare it to is The Locust’s angry tweety bird vocals. It’s really weird, and pretty annoying. At least to begin with.

Yet what’s most surprising about it is that it works incredibly well with the rest of the record, possibly because Mi Ami are a weird band and Steal Your Face is a weird record.

Mi Ami take the typical tools of a rock band, the typical guitar bass drums vocals set up, and twist it into something new, something so far removed from typical that it’s pretty hard to describe. There's obvious debts owed to dub and to African music, plus their noise rock roots, with a bit of post-punk feel thrown in for good measure. It’s a veritable melting pot of influences and ideas, one that doesn’t really make sense. Steal Your Face shouldn’t work. None of the parts really fit together. The drums are all over the place. The bassist is in a world of his own. The guitar alternates between sounding like it’s being dropped and sounding like it’s being attacked. The whole thing seems like a mess. Imagine that you are stood in an empty room, with two bands practising in two rooms adjacent to you. In the room to the right is a noise band pretending to be a dub reggae band; in the room to the left is a dub reggae outfit pretending to be a noise band. From where you are stood you can hear both bands playing at the same time. This is what Mi Ami sound like to begin with; an unholy din that makes little sense. Increasingly things begin to make sense and everything slots into place. You latch onto the rhythm of the drums, the bass lines become more pronounced, the guitar and vocals slip into the background, becoming more of a texture than the focal point of the song. After a while you find that you’re tapping your foot and nodding your head. You could even find yourself saying that the grooves are really infectious, but you’re not that lame, so you just stick to nodding your head and maybe shuffling your feet a little. Now Mi Ami are making sense. Now you realise that this band is actually really good. Really, really good. And they make you want to dance. Not lots, as you’re a Serious Music Fan and Serious Music Fans do not dance. But you’ll concede to nodding your head and tapping your foot. Maybe you’ll even move around a little, but those hips are staying still. Mi Ami still seem like an odd bunch, and none of it really makes sense, but why let that stop them?

In addition to having an annoying voice, it’s also pretty much impossible to make out what Marin-McCormick is singing. On ‘Latin Lover’, I think I heard “I felt something/I got excited”. Now if this record came out about a week earlier I could slip in a really good joke about Ricky Martin coming out, but unfortunately for you I won’t be able to. I bet you’re gutted. On slow burner ‘Native Americans (Born In The U.S.A.)’ he definitely sings “The good times they always come to an end”. With Steal Your Face clocking in at just over 25 minutes, the good times come to end very suddenly, with little fanfare. Steal Your Face ends as it began – ‘Slow’ climaxes as ‘Harmonics (Genius Of Love)’ begins. A deluge of guitar noise, a wobbly bass line and stuttering, shuffling drum work with yelps all over the place, Mi Ami finish as they started, shaking hips and nodding heads.