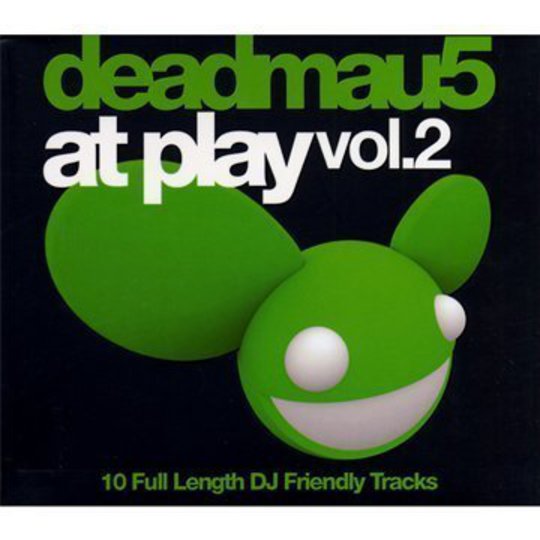 It’s safe to say that Joel Zimmerman aka Deadmau5 is a lucky chap. Anyone who’s used to using clouds of Sound or Mix variety these days knows that there’s a plethora of wannabe DJ superstars in waiting lurking out there, and Deadmau5 is an example of just how that world can function to your advantage. After all, it was only 2006 that he first emerged as the next superstar of the dance world through the reams and reams of counterparts, and his rise has been nothing short of meteoric. That’s probably the fairest that can be said.

Of course, there are certain unfair things that can be thrown his way as well – a prejudicial attitude towards his crossover appeal, for example. That’s the done thing, right? Well, it’s safe to say that I, as well as many others, have been party to that. So At Play Vol. 2 arrives on my doorstep containing an already near-peak level of apprehension based on damn near nothing. Unwarranted dislike aside, there certainly is a level of respect for his ability to make a decent tune. But this here CD is not an ordinary album; it’s more a compilation of new material comprising of what is referred to as ’10 DJ friendly tracks’. Acting as not only a mix of his own standard output but a sampler for those CDJ lovers out there, each track is neatly segued so as to make the tracks flow perfectly and act as live set fodder.

Where the stand out tracks come from, though, are the times Deadmau5 taking the reins of the project himself. Tunes like ‘Mr G’ verge on the housier side of Simian Mobile Disco and Justice, with enough variation in the underpinning melody to keep the active listener alert. ‘Reduction’ makes the premise of these being DJ friendly tracks viable, and already pricks these ears as an excellent antagonist to Brazilian housemeister Gui Boratto. Meanwhile ‘Orca’ applies the everpresent euphoric noise signals to emphatic effect as its climactic crescendos weave around to create an almighty house effort. All of a sudden, the sense that there may be some humble pie waiting for me kicks in; Deadmau5 has merely become more famous than the traditional underground crew that such music naturally orientates around.

But it’s when Zimmerman dips into the ironic side of what he does that it becomes clearer why his popularity has sky-rocketed, but his credibility has waned. This side is more affiliated with the mainstream pop of today which, while not always atrocious, leaves a lot to be desired in comparison to what else he has to offer. ‘This Is Also The Hook’ is the prime culprit – using a speak and spell vocal line to describe how the song is built and rolls along is never going to be anything apart from agitating, really. The intended humour of it all is just watered down by the fact that the track is really quite boring. The collaborations with label mate Melleefresh, ‘Attention Whore’ and ‘Sex Slave’, are where things really get unstuck though; their Benni Benassi inclinations providing little else other than embarrassment

What’s missing is focus. It’s not that the crossover appeal is unwarranted; it’s just that the crossover has created a gaping hole in Zimmerman's class. If his focus was to rest on the floor-ready - as opposed to the sky reachers - his story could have been oh-so-different. But maybe, that wasn’t his intention.