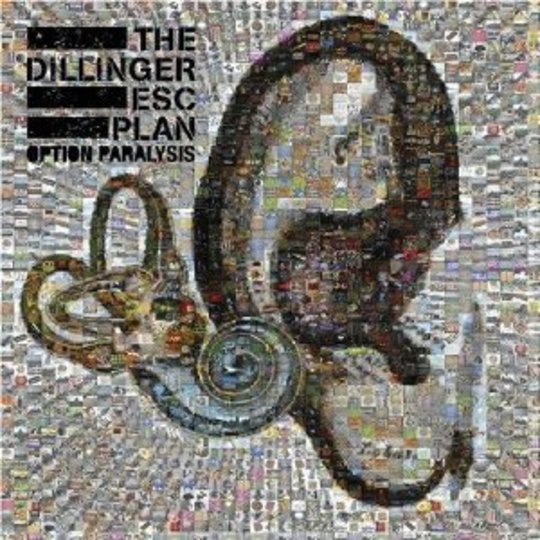 “What did you expect?” vocalist Greg Puciato mockingly asks on opener ‘Farewell, Mona Lisa’, “that we would ever leave? What did you expect from us? You should never put your trust in any of us” he sneers at DEP’s critics, at those who would criticize attempts to change, or develop, those that cling to the band’s past and refuse to move with the times. Haters gonna hate.

In a sense, Option Paralysis, should appeal to those hoping for another Calculating Infinity. Everything that won Dillinger Escape Plan fans tens years ago is still present, and seems to have been turned up to 11. The riffs are harder, the rhythms are faster, everything is as brutal and as crushing as it’s ever been, maybe more so. If Dillinger Escape Plan are attempting to paralyze the listener, then they’re certainly going about it the right way. Puciato is at the top of his game – his vocals are harsher than before, more refined. His ability to go from a soulful croon to an ear splitting, blood-curdling scream is no more apparent then on ‘Widower’, a song that starts off as lounge jazz piano ballad (featuring Mike Garson, David Bowie’s sometime pianist, no less) building and building over the course of four minutes before exploding into a huge thrash metal chorus.

If anything, Dillinger Escape Plan are victims of their own success. Being so far in front of the game, their only real competition is themselves. If previous album Ire Works was their most experimental, with the most obvious ‘pop songs’ (for want of a better phrase), then Option Paralysis, is their most goth sounding record. The inflections used in both music and vocals throughout Option Paralysis, suggest, at the very least, a passing interest in the most blackest of music, and their stint as openers on the final Nine Inch Nails tour also appears to have rubbed off on them They may not be going in for the eyeliner and dishevelled, wannabe vampire outfits (New Jersey boys are tough), but they’ve definitely bought the records. The whole record possesses an industrial feel, be it in the synths or the drum machines or the moody-sounding atmospherics that are peppered throughout the record. Option Paralysis, may not win back fair-weather fans, but they’ve again proved why they’re regarded as one of the best in their field.