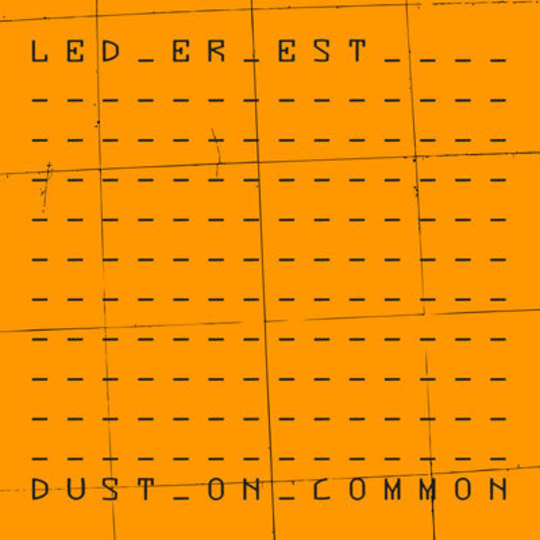 Listening to this album by Led Er Est, the synth-happy New York trio of Shawn NoEQ, Samuel Kklovenhoof and the disappointingly named Owen Stokes, it’s clear that ‘cold wave’ is something of a misnomer as a rote descriptor to attach to their music. Dust On Common is anything but cold. It’s full of the warm rush of analog keyboard, the very-human vocal stylings of Kklovenhoof, and a giddy love of song structure. If Pieter Schoolwerth’s Wierd label and club, which are releasing this record, have any burgeoning stars in their midsts, it’s in the shape of Led Er Est, who manage to filter their avant impulses (Throbbing Gristle, Cabaret Voltaire) through a clear and demonstrable affinity for the destroyed-love pop of Soft Cell and the Human League.

There’s certainly a harking back to the post punk era at work here, even in the non-synth related touchstones that emerge. Kklovenhoof’s scratchy vocals are often sourced from the same kind of bile that knotted up in the throat of Jon King from Gang of Four circa Entertainment!, and his sparse guitar lines on tracks like ‘Laredo’ directly feed off John McGeoch’s work in Magazine. But Dust On Common is far from a simple retro retread. It’s easy to isolate parts of Led Er Est’s music and trace their lineage, but the overall picture is more distinct, where all the musical brickwork has been piled up and amalgamated into something uniquely their own. The first major inkling that Led Er Est are a band utterly enraptured by habit-forming pop comes two songs in with ‘Port Isabel’. Kklovenhoof intones infectious lyrics over a wiry electronic backing and a few subtle chord changes, which really demonstrate the band’s songwriting nouse. This is the kind of other-pop that can completely transport you out of the moment, where the undertow of sadness and sense of longing are both impossibly moving and designed to make you move, eyes closed, on a crowded dancefloor, buffered by ear-shredding volume. That moment when Kklovenhoof first hits the ”Her eyes will feed us” line is simply one of the great pop moments of the year to date.

Naturally, this sets a pretty high bar for Dust On Common early on, but the rest of the album doesn’t disappoint. What makes it work are the subtle fluctuations in mood and intonation, with the band constantly modifying and tinkering with their sound, but still leaning on familiar tropes that run throughout. They’re fond of setting drum machines to an impossibly fast clip (‘Laredo’, ‘Something For the Children’) and also dropping wonderfully appropriate backing vocals, even replicating that famous “hey!” from the Art of Noise. Occasionally, parts are slotted in that don’t quite fit, such as the unwelcome sound of an acoustic guitar on the otherwise otherworldly ‘Destination Sanity’, but such quibbles are few and far between.
There are only nine songs here, and the runtime barely crawls over the 30-minute mark, but Kklovenhoof and his colleagues manage to cover ample ground in such a short space of time. The second half of the record diverges into clodhopping noise on ‘Something For the Children’, but even here their impulses to form palatable structure out of the chaos are evident, as a carefully plucked bass melody gradually emerges from the morass. The raindrop-like synth patterns and uneasy undertow of ‘CC Exit’ bring the album to a beautiful close, sounding like a sci-fi soundtrack in search of some impossibly austere visuals to complete the effect.

Dust On Common is an album that is likely to confound expectations people may have had on it based on the Wierd scene. The cold wave and minimal electronica tags simply don’t work here—there’s certainly nothing minimal about the thick bass and cluttered synth lines that predominate. It’s an unabashedly commercial record for the most part, full of concise and finely honed songs that wouldn’t sound out of place in the mainstream if there were a sufficient marketing budget to foist Led Er Est on the masses. For now, that will remain an unreachable dream, but there’s vast potential here, in a band perfectly capable of reaching into the past for inspiration and coming up smelling like a fully-formed 21st century pop act.