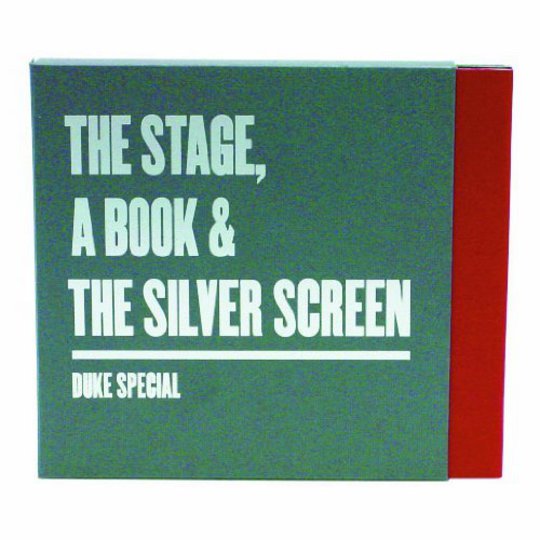 Duke Special has always been a curious prospect. His live performances are usually joyous affairs, often seeing his flouncy vaudevillian antics accompanied by maniacal cheese-grater wielding percussionist Chip Bailey. One strength he constantly displays is to make each show seem like a one-off, as opposed to the identikit gigs yawned out by some other perma-touring artists. However, he has always been faced with the dilemma of how to communicate the eccentric charm of his live shows on record, a feat he has yet to fully accomplish really. His previous album I Never Thought This Day Would Come was a classic case in point. The record was so polished that the set of jaunty piano singalongs came out limper than their quality deserved. Nowadays, finding himself free of the big label constraints which presumably played a big part in this, Duke is going it alone for a laudably ambitious project. The Stage, A Book And The Silver Screen comprises two concept albums, as well as a concept EP.

The first disc, The Silent World of Hector Mann is a collection of songs inspired by Paul Auster's The Book of Illusions, which features silent film star Mann. Special sent a copy of each of each of Mann's 12 films to a different Irish artist with a brief to pen a pre-rock and roll style song about each, which he would then record himself. The result, in spite of the slightly disparate elements is surprisingly cohesive and massively enjoyable. By far the strongest piece on the record is Neil Hannon's, 'Wanda, Darling of the Jockey Club', which tells the story of a bumbling waiter's infatuation with a female pilot. Hannon's wit, a playful piano line and the cheery warmth of Special's delivery mingle perfectly to produce one of the best morsels of pop either artist has ever been attached to.

The theme of the oafish suitor pursuing a woman who is way out of his league is a common one on the record, continued more directly but no less charmingly on 'Country Weekend', this time featuring "just a chauffeur who really hopes for the honour of his passenger's hand". This would appear to be a common component of Mann's films, as was the idea of the loveable rogue, a subject covered on the Thomas Truax's ludicrously bouncy 'The Prop Man', an almost slapstick song about a thieving film staffer. The silly fun displayed here is an example of how with this record Special has gone the furthest distance yet towards capturing the merry spontanaeity of his live shows. (8)

Disc two, the Huckleberry Finn EP, is a suite of songs written by Kurt Weill, originally intended for a musical which was left unfinished when Weill died. Where Silent World played up to Special's penchant for quirky piano pop, Huckleberry Finn adds a touch more grandeur. The songs are laced with strings and splashed with brass, but the slightly bigger sound does not make it any less playful. The record might only be a touch over a quarter of an hour, but there's still a lot to savour, from the swaying, swooning, 'Chantry River' to the flamboyantly catchy 'Apple Jack'. It is the EP's closer, 'Catfish Song' which steals the show though, a darling little duet which apes an interchange between Tom 'n' Huck. (7)

While Huckleberry Finn sounds richer than the mischievous Silent World, it is Mother Courage and Her Children which really encapsulates the depth of ambition of Duke Special's mammoth project. The final disc is a collection of studio recordings of songs from Bertold Brecht's anti-war play of the same name, to which Special contributed music for Deborah Warner's recent production for The National. The sizeable arrangements are probably to be expected given the context, but what you might not expect is that an artist who a mere disc or two ago was chirruping cheerfully about clumsy waiters can comfortably turn his hand to lines like "We hated the soldiers / Their army took our town / I was sixteen / The foreign occupier grinned as he loosened my nightgown". His voice is powerful and soulful enough not to be lost amid the soaring orchestral backing, something which is exhibited best in 'Mother Courage' and its reprise which closes the album.

The subject matter may be dark, but sometimes you have to listen carefully to realise this is the case. The powerful arrangements lift the tone, adding an occasional air of triumph to the grimness. So too do Special's piano melodies, particularly the driving, forceful 'The Great Capitulation', a common thread which links together all three elements of The Stage, A Book, And The Silver Screen. (8)

With this collection, Duke Special has escaped from the confines of the conventional, and it has clearly done him the world of good. Each of the three records are hugely enjoyable standalone pieces, but as a trio they serve to illustrate his limitless ambition, versatility and deft skill with a melody. Lord knows what else is lurking in that eccentric brain of his, but here's hoping his future projects are as gloriously outlandish as this.