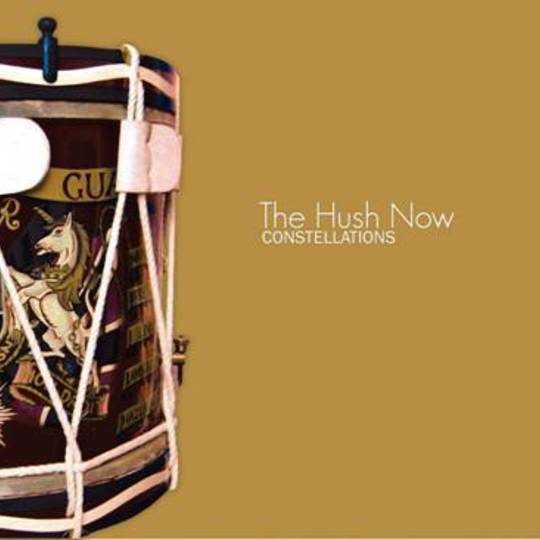 In The Anxiety of Influence, Harold Bloom argues all poetry is influenced by what came before it, either through imitation or reaction. Whether or not The Hush Now are aware of Bloom’s work is unclear, however, they do validate his theory.

Constellations is shot through with familiarity, from the chiming power-chords of ‘Contrails’ to the lumbering climax of ‘Carousel’. The record lies in the shadows of power-pop, from the Posies through to Teenage Fanclub - the Hush Now don’t shy away from their influence.

Following on from last year’s eponymous debut, Constellations has a rougher sound; with a focus on perfecting the three-minute blast of ‘Sadie Hawkins Dance’. But despite familiar themes, it seems the chaps shot their load with the yearning indie-pop of ‘Sadie…’. The sense of midsummer longing remains on Constellations, though Noel Kelly’s vocals have taken an unfortunate turn.

Whilst Kelly’s voice has always been nasal, here he sounds as if his two core influences have been Save the Day’s Chris Connelly and Kermit the Frog. Nasality as such isn’t an issue, and for some bands it’s enough to build a career around but here it transforms the record from charming, if uninspired to a tedious slog.

‘Misanthrope’ is shapeless; Kelly’s vocals are thrown over a lilting instrumental last seen as a fade-out on Friends. Sandwiched between ‘Smokescreen’, which provides a respite from cartoonish vocals with a solid, if bland performance, and ‘I Saw You First’, a song with a title suggesting rather more intensity than the band could muster.

The power-pop perfected on The Hush Now remains intact, but the lack of any marked progress and limited references mean that that's hardly a reassurance. ‘All You’ve Said and Done’ is born from the same school of middle-of-the-road fuck nuggetry as Foo Fighters’ ‘Times Like These’. 3/4 rhythms are paired with jangling chords as Kelly hangs limply from the chorus with all the intent of a wet flannel. That’s not to say that the record is unpalatable, but it lacks any real drive, dispassionate performances render the power-pop somewhat functionless. This is pleasant, but not in any manner that will encourage endearment.

The Hush Now fail to captivate the listener, yet in this they are saved. A casual lack of conviction and overwhelming feeling of emptiness throughout the record turns your opinion as it begins to blacken. They may be middle-of-the-road, but there is some comfort in their undoubting acceptance of this. The Hush Now could be a good band, but the lack of conviction that saves them from oblivion leaves enough rope to hang them. It’s not as if they have misplaced assurance in what they’re doing, but it would be nice to feel that there’s a little more belief in the band than merely passing the time of day.