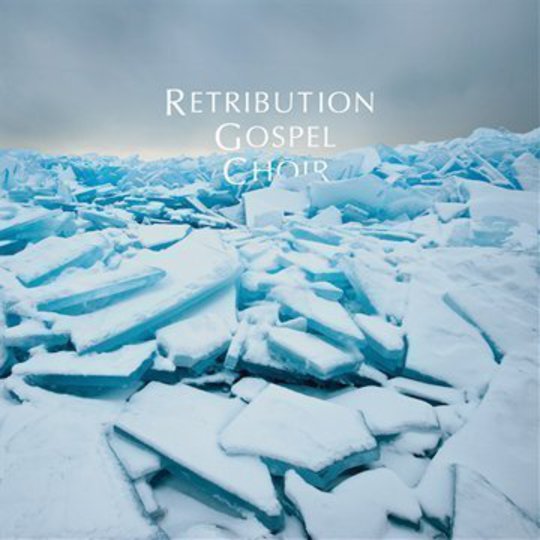 The word ‘cathartic’ gets bandied for some downright wishy washy reasons, but its aptness is pretty clear with regards to Retribution Gospel Choir. Parent band Low’s avoidance of volume always smacked of suppressing something nasty, and as a minimum RGC’s thunder offers catharsis to Low fans itching to find out what would happen if the restraint of songs like ‘The Lamb’ or ‘Monkey’ were blasted aside by the rage you’d swear was just below the surface. It is also, in all probability, a prosaic release for Alan Sparhawk and Steve Garrington, given that their notional dayjobs involve playing instruments that are meant to be fun in the least exuberant way possible. And then, of course, there’s the darker stuff – we all know about Sparhawk’s End of the Road ‘incident’ fronting Low; it’s hopefully not distasteful to speculate that he mightn’t have hurled that guitar if he’d had his other band by way of outlet (you can’t tell me this is just a bit of stagecraft).

So yeah, Retribution Gospel Choir: they’re the dark matter that balances out the mannered, musically exploratory Low. They represent catharsis, for both performers and audience. However, that’s not really the same as being a dynamic artistic force and plainly speaking, 2008’s Retribution Gospel Choir already answered the question ‘what would Low sound like if they were loud and angry?’ 2 doesn’t really alter that answer, and thus doesn’t quite have its predecessor’s impact – the likes of ‘Working Hard’ and ‘White Wolf’ make for perfectly enjoyable Crazy Horse-ish garage rock, but have a vague pointlessness to them, held back from being stoopid fun by Sparhawk’s thin, fretting presence, but too bound by the retro form to feel like anything more than genre pieces.

Still, it’s worth bearing in mind that while it seems likely that this band will always have a intentional Luddite quality, the fact is that Low, loud, tends to sound good. Is ‘Poor Man’s Daughter’? anything more than a Trust type dirge a few notches louder? For a while, no, but then about three and half minutes in a roiling tsunami of sludgily melodic guitar noise smacks into you with such force that it would literally blow your face off, were the laws of physics subject to any sense of the appropriate.

The opening trio of tracks do everything you could possibly want them to, most especially ‘Hide It Away’, a wintry shimmer that grows from nothing to something of immeasurable hugeness. “You started to shake, you cannot even say your line” spits Sparhawk, shortly before the gorgeous melody detonates into a pyrotechnic cloud of overdrive, big as the sky. Lyrically, ‘Your Bird’ is the hit of bile we came along for, Sparhawk seemingly sneering at the very concept of songcraft, the “little song” on the radio, set to a granite dense, rough hewn riff that somehow finds room to compact as the song progresses, finishing like a drill to the gut. And then there’s ‘’68 Comeback’, which is just a 43 second Zep out, but a good one. And loud guitars are kind of the point of this band, right?

Maybe not: the closing ‘Bless Us All’ is far from 2’s most immediate song – it’s certainly not drivin’ music, which for better or for worse a lot of this record is – but it’s the one that haunts the most. It’s nearly as quiet as Low, a metronomic bass pulse set to an eerie whisper of radio and a tiny sob of violin, eventually overlaid by a mournful two note acoustic refrain. The guitars are never cranked up, but the vocals are, a (seemingly uncredited) raft of backing vocalists turning the band into something actually like a gospel choir. But it has none of Low’s detachment: it’s so terribly sad, something more akin to Spiritualized’s bleaker moments, only rawer and without the puns. Sparhawk isn’t a man given to naked autobiographical writing, but whatever the intent of ‘Bless Us All’, it’s pretty goddamn affecting when he signs off with the defeated declaration “the last thing I need... is a lover”. Not one for Mimi, I’d hope, but it does point to something else Retribution Gospel Choir could evolve into, beyond 2’s comparative lack of surprises. But in the final analysis is that a place any of us would like them to go, really?